(Clearwisdom.net) A grand parade composed of six thousand Falun Gong practitioners from all over the world was held on June 6, 2009, on 6th Avenue in midtown Manhattan, New York City. The large-scale procession was majestic and in good order, conveying the messages of Falun Dafa's wide spread around the world, the persecution in China, and saving sentient beings. 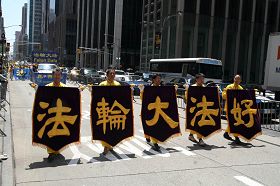 Falun Dafa Has been Spread to 114 Countries

In May, 1992, Master Li Hongzhi, the founder of Falun Dafa, started teaching in Changchun. Within seven years, by word of mouth, the blessings of Falun Dafa were spread to every corner of China, and between 70 and 100 million people were practicing Falun Dafa. At dawn every morning, practice sites of hundreds to thousands of practitioners could be seen everywhere in cities and the countryside. Falun Dafa was first introduced outside of China in 1996.

Falun Dafa transcends nationalities, languages, and cultural boundaries. Its principles of Truthfulness-Compassion-Forbearance touch the hearts of everyone. This pure discipline includes the elderly, young people, children, people of different races, social status and professions. Everyone in the group strives to live by the principles of Truthfulness-Compassion-Forbearance to be good people who are constantly cleansing, purifying and improving themselves in Falun Dafa.

The first section of the parade procession was led by the Divine Land Marching Band, composed of over a hundred Falun Gong practitioners. They performed "Falun Dafa Is Good," "Fa Drums and Fa Trumpets Shake the World of Ten Directions," "Fa Rectifies the Universe," and "Holy Law-Wheel King." The resounding music reverberated over the high-rise buildings in Manhattan, drawing attention from passersby, drivers and business owners. Practitioners from over 40 countries held beautiful banners reading "Falun Dafa" in different countries. They wanted the people of the world to know that Falun Dafa has been spread to so many countries, and everybody has an opportunity to learn Falun Gong.

After that were the Dragon and Lion dance teams, celestial maidens spreading flowers, a huge model of the book Zhuan Falun and over 40 book models of Zhuan Falun escorted by celestial maidens. Following these were an exercise demonstration team composed of six hundred practitioners. They demonstrated the gentle and elegant Falun Gong exercises accompanied by the peaceful music. The compassionate energy emitted from them harmonized the environment. Spectators were amazed while watching this simple and miraculous exercise demonstration.

In the face of inhuman and brutal persecution, torture and killing, Falun Dafa practitioners have remained steadfast in their belief in Truthfulness-Compassion-Forbearance.

Disintegrate the CCP and Stop the Persecution

Since the persecution started in July, 1999, over the past ten years, more than 3,000 practitioners are verified to have died as a result of the CCP's persecution. More than a hundred thousand practitioners have been detained in forced labor camps and mental hospitals. They were forced to do slave labor, forced to attend brainwashing sessions and tortured. The CCP has committed monstrous crimes.

The publication of the Nine Commentaries on the Communist Party at the end of 2004 unveiled the prelude of the "Quit the CCP" movement. Within just five years, 55 million Chinese people have announced their resignation from the Chinese Communist Party and its affiliated organizations.

The parade procession marched through 20 streets on the parade route, telling people in multiple aspects that the CCP is disintegrating, calling on people to see clearly the CCP's evil nature, and joining in the historic mighty current of "disintegrating the CCP and stopping the persecution."

Echoing the first section of the procession, hundreds of practitioners who held colorful banners bearing the message of "Falun Dafa is great" sincerely told the people again and again "Falun Dafa is good" and "Truthfulness-Compassion-Forbearance are good," accompanied by the vigorous performance of the song "Falun Dafa Is Good" performed by the second Divine Land Marching Band.

Led by a beautiful float, the waist drum team that appeared at the end of the procession performed "Falun Dafa Is Good." The parade came to a successful end.

The parade procession drew attention of passersby from beginning to end. Some people took photos, and some had conversations with practitioners. Grant and his wife happened to pass by. They saw the grand parade and stopped to watch. Grant said that he had learned about Falun Gong and the persecution in the media. He said, "I support Falun Gong!"

Todd Evans watched the parade until it ended. He was stunned when he saw photos depicting practitioners who have been tortured by the CCP and have been wounded and injured. He said that it was horrifying, and could not have been done by human beings. He had learned about the persecution of Falun Gong in China, but did not know that it was still going on. He said that the CCP is doing things against the law and should be stopped. He was pleased to learn that Falun Gong books and exercise music can be downloaded freely from the internet. He said he would learn more about Falun Gong.

Natasha is from Virginia and used to practice Yoga. She has been looking for a good cultivation practice. While watching the march, she came across a practitioner from Virginia who introduced her to Falun Gong. Natasha told the reporter that she was interested in Falun Gong's characteristic of looking within and cultivating xinxing. She wanted to start practicing Falun Gong after returning home. She was especially moved today by this group of people who have made efforts for others, and for those innocent people who are suffering persecution in China.