Mr. Applebaum said in an interview that the overall level of this year's competition improved by leaps and bounds, the inner meaning of the entries and the beautiful values they conveyed were impressive. 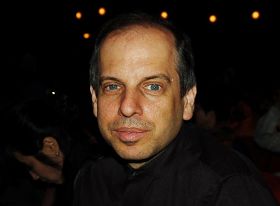 Mr. Applebaum served as senior editor at Multichannel News and Cablevision magazines, and hosted Tomorrow Will Be Televised: a series covering the world of television and the people that make it happen. Besides TV news items and commentary, Tomorrow features interviews with network TV executives, show producers/creators, entrepreneurs launching new TV programming and technology, TV critics and pundits.

Mr. Applebaum was impressed by the overall level of this year's dance competition and the competitors' techniques. He said, "Everybody gave their A+ game. This was a very interesting competition, really a lot of competition. It's going to be very difficult for the judges to choose a winner, they were all great in their first and second round, I thought they really knocked it out of the park, very difficult. The best competition of the bunch!"

"Better music, better use of music by the competitors, better dancing skill, better artistry expression, and better character depicting and story-telling. I'm really impressed with the fact that both the men and the women are stretching themselves. You have to remember these are 14 and 15 year old teenagers, it is really amazing the maturity."

"Great techniques! Great body control! With the men, another interesting thing is that they are using some of the women's moves, like the kick up. That was a nice trick. They showed their more sensitive side. In the case of the women, they're finer, and they're even using the flips which are even not easy for the men to do."

Mr. Applebaum used hand gestures to describe the highly difficult moves in Chinese dance, "We have these two moves that are new: one is what I call the breakdance move into a spin, where they start into sort of a breakdance, and then they turn up, raise up and sit on one leg. The men are doing the flip moves, which is very tough to do because if you don't get the height you will fall flat on your face--I still wonder how can they do that."

Mr. Applebaum was impressed by the seamless incorporation of dance and music, he said, "I like the Chinese traditional music, say the flute in the Orchids in the Valley, the solo erhu and piano in the Spring. I thought they used the music much better (than last year), they choreographed to the music, they didn't just string moves together, and they were marvelous! They used the music great with their movement, breath and expression, they showed their more sensitive side, they were terrific!"

"Another example, Zhang Guolao Rides Backward on a Donkey, kudos to the composer of the donkey music. It was well done, because of the high meatiness of it you've got the donkey shrieking, and it was very inventive! He choreographed to the music, had good artistry expression, it's very exquisite, he stayed in character throughout."

Mr. Applebaum noticed that the competition emphasized character portrait and expression of legendary stories. He said, "You had this wonderful donkey deal. You had the monkey king. You had the wounded warrior, you had the magician thing with the table, you had the hero who saves the baby, you had the fairy of phoenix, you had the lady flying to the moon......With the great technique and music, and they made stories, made characters out of them in just several minutes. "

Mr. Applebaum's favorite piece was "Monkey King." "In terms of the monkey king what you also saw was that wonderful outer joy and passion. It really came through. I personally think he will win this because in the second round he had the best light flips and he balanced it off very well, great beginning and great ending. You have to leave them great at the finish as well as the start. You have got to get the inner meaning out there. You can't keep it inner. The monkey king brought that inner joy out there. He brought a lot of inner joy and inner excitement and inner passion out there. You could get that in the movement--the vivid and fine way he moved his head, the way he moved his hands, the way he moved his arms. It wasn't just at the beginning, it was at the end. He took the character and stretched it as much as he wanted it to go, and you got the joy throughout. He didn't just do it at the beginning then the flips and nothing at the end. It all worked. It was a wonderful routine, wonderfully choreographed.

Mr. Applebaum captured some unique characteristics in Eastern culture, "The western hero was sometimes driven by revenge, say his wife or children were killed and he fights back for them. We can all learn something from this. We can learn to love each other, to be tolerant, to respect the heaven and the earth, to respect each other's culture and lifestyle. It doesn't have to be a tragic situation--heroism can move your heart, passion can move your heart, joy and fun can also move your heart."

Other than the "International Classical Chinese Dance Competition," Mr. Applebaum also shows concern and appreciates the series of international competitions hosted by NTDTV that aims to revive traditional Chinese divinely-inspired culture, and promote outstanding culture and art of humanity. He said, "I've also seen the Kungfu, vocal, the violin, piano and cuisine competition of NTDTV in the past year, and they were very good. They are wonderful violinists, wonderful pianists and vocalists."

"That's all good for the world. We do need the upright manners of life and arts, we need the virtues and disciplines, and we need spiritual quest and uplift. Nobody is saying you have to practice it, but at least recognize and live with it, take it for what it is," said Mr. Applebaum.

“A Westerner Who Promoted the Shen Yun Performances (Photos)”