Switzerland: Condemning the Persecution to Oppose Tyranny and for Love of China (Photos)

On June 20, 2009, many people who passed by the middle bridge in Basel, Switzerland noticed the poster exhibition at the foot of the bridge. The posters included photos of Falun Gong group exercises around the world and of practitioners tortured by the Chinese Communist Party (CCP). Having seen the exhibits, many passersby talked to the practitioners in an effort to learn the details. Some were interested in the exercise photos, asked what Falun Gong is, and inquired about local practice sites. 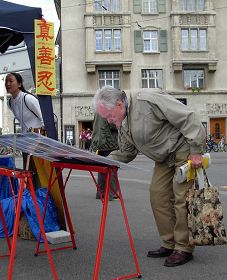 Mr. Horizonman signed the petition and said, "I signed it not only because I am against tyranny but because I love China." 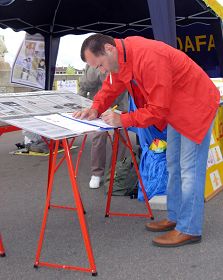 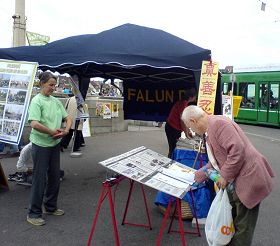 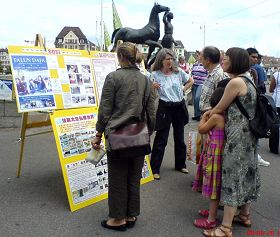 Taking note of the persecution in China 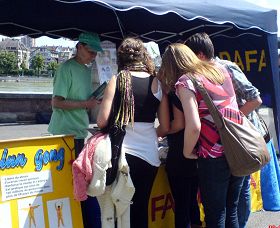 Signing to Oppose Tyranny and for Love of China

Having seen the exhibition, Mr. Horizonman signed the petition calling for an end of CCP atrocities of organ harvesting. When practitioners thanked him, he said immediately, "I should thank you. Thank you for everything you are doing here."

When asked why he signed, he said, "I signed it not only because I am against tyranny but because I love China. This persecution should not happen." Mr. Horizonman used to specialise in Chinese language at university. He had a good understanding of Chinese history and even translated Tang poems. His experience in Vietnam and Hungary made him well aware of the violent nature of the Communist Party. Therefore he said, "I love China and Chinese people very much. Chinese people are extremely smart, humble and have a long history and culture. China should return to its origin. The totalitarian ruling of the Communist Party must be stopped to allow freedom and development. China is such a great country with huge potential. It will play a vital role in future."

He regarded the CCP's atrocities of organ harvesting as a horrible genocide. He said that God would settle everything, and that dictatorship should vanish in China.

Before he left, Mr. Horizonman thanked practitioners time and again for their efforts, "Thank you. What you are doing here is highly noble."

An older lady encouraged practitioners to carry on. She said she signed in hope of stopping this persecution, "What else can we do to prevent the situation from deteriorating?"

At each Information Day some people start learning the practice after reading Falun Gong flyers. Ms. Dominika was one. Having obtained information during one event, she went to a practice site to learn the exercises. But she did not continue very long. Seeing Falun Gong's information stand again today, she signed the petition and talked to practitioners.

She said she thought the CCP persecution of Falun Gong practitioners was very cruel, "I can't talk about organ harvesting because it shocks me. How cruel! I read something similar over the Internet and thought that I must come and ask about the current situation." Finally, she said she would start to learn the practice again.

The Whole World Should Work Together to Stop the Persecution

Mr. Hadler had already learned Falun Gong's five sets of exercises. He said, "Practicing Falun Gong makes me relax. I am very interested in Falun Gong, which is a good practice."

He knew about the CCP persecution, "It is very hard for people to get true news about China. What is happening there (the persecution of Falun Gong) is appalling. People are cruelly tortured. Their plight is miserable. Organ harvesting is especially horrific, terrible and frightening. The whole world should work together to stop the persecution."

He also said that he would tell more people about the facts that he learned. "It is wrong (for the CCP) to subject the masses to such cruelty. I am against it."

Chinese People Quit the CCP After Learning the Facts

The Information Day was held on the bank of the Rhine River. There were many tourists passing by, including Chinese people. Having read the exhibits, a Chinese from Indonesia asked for more information. Practitioners told him and his companion that Falun Gong had spread to 110 countries and regions around the world. But because the CCP would not allow people to follow the principles of "Truthfulness-Compassion-Forbearance," it started the persecution of Falun Gong. Practitioners also told them about the CCP atrocities of organ harvesting from living Falun Gong practitioners. Seeing the photos of practitioners being tortured, a girl from China standing nearby sighed, this was tragic. In the end she quit the CCP and its affiliated organizations.

“71-Year-Old Ms. Li Shuxian Dies as a Result of Persecution in Liaoning Province”