June 20 is World Refugee Day, and events were held by UN Refugee Agency offices around the world from June 18 to 20. This year's theme is "Real People, Real Need." On June 19, Falun Gong practitioners in Thailand were invited to the agency's Bangkok Center to perform. 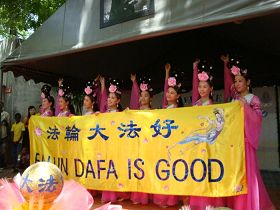 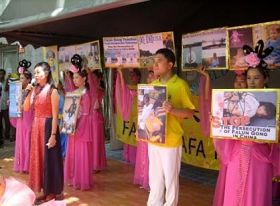 The practitioners also displayed a series of posters. Accompanied by the song "Coming for You," a practitioner told how Falun Gong has spread around the world and about the ongoing persecution in China. The 23-poster display consisted of three sections: the beauty of Falun Dafa, the spread of Falun Dafa around the world, and the brutal persecution in China. Some audience members were brought to tears as they learned more about the persecution.