United Kingdom: Practitioners Celebrate World Falun Dafa Day and Gain Support from the British People in Calling for an End to the CCP's Persecution (Photos)

May 13, 2009 was the 17th Anniversary of Falun Dafa's public introduction and also "World Falun Dafa Day." On May 9, Falun Gong practitioners from the UK gathered in front of the National Gallery in downtown London to celebrate World Falun Dafa Day. They also explained the facts about the practice and the persecution and collected signatures. Many people signed the petition calling on the international community to investigate the CCP's atrocities of harvesting organs from living Falun Gong practitioners and calling for an end of the CCP persecution. In just one day, approximately 900 people signed the petition expressing their support.

On Saturday, May 9, at 10 a.m., World Falun Dafa Day activities were held on the square in front of the British National Gallery, which is very close to Trafalgar Square, a well-known place of interest in the UK At the center of the square in front of the National Gallery, several practitioners held a large banner worded in both Chinese and English: "Celebrate the 17th Anniversary of Falun Dafa's Public Introduction." An arc of balloons in different colors were set above the banner. Another banner in English reading "5.13 World Falun Dafa Day" floated under a hydrogen balloon high in the air. Over 20 Falun Gong practitioners in yellow costumes demonstrated the five exercises in front of the banners. Many passersby stopped and watched the exercise demonstration. Some followed the gestures of these practitioners to learn the exercises and asked for contact information of practice sites, saying they were interested in learning Falun Gong. 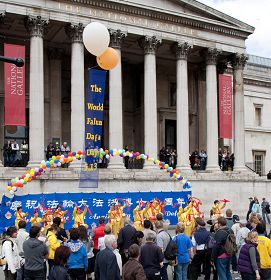 In addition to the demonstration of the Falun Gong exercises, the practitioners also gave a waist drum performance. The lively drumbeats reflected their happiness in celebrating World Falun Dafa Day. Next, several women practitioners sang songs composed by practitioners such as "To Celebrate Falun Dafa Day," "Let's Sing Truthfulness-Compassion-Forbearance," "Coming for You," "Awakening," and others. Through singing these songs, the practitioners not only expressed their happiness and gratitude to Master from bottom of their hearts but also called on those deceived by CCP to learn the facts for a good future.

On one side of the square the practitioners set up a picture display showing how Falun Dafa is practice around the world. Among over 20 precious historical photos, there were scenes of group practice in China before the CCP started to suppress Falun Gong on July 20, 1999, as well as group practice in other countries around the world and images of selected proclamations and resolutions that Falun Gong has received worldwide. Falun Gong is practiced in 114 countries and regions. Falun Gong books have been translated into more than 30 languages and published all over the world. Falun Gong has received more than 1800 proclamations and resolutions.

Near the picture exhibition, the practitioners placed two tables for people to sign the petition. On the tables were also Falun Gong flyers in both Chinese and English, CDs, booklets of the Nine Commentaries on the Communist Party and VCDs. Many paper lotus flowers handmade by the practitioners were given to people who came and signed the petition expressing their support. Each small lotus flower is attached to a tiny bookmark worded "Falun Dafa Is Good." From 10 a.m. to 6 p.m. about 900 people--including scientists, doctors, athletes, architects, and students--signed the petition. 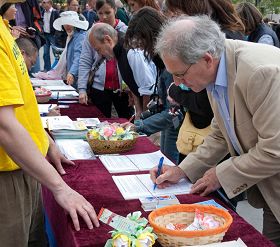 People sign the petition to express their support for Falun Gong 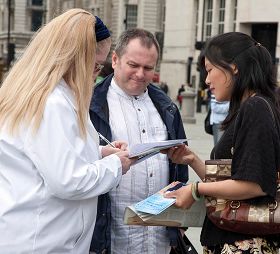 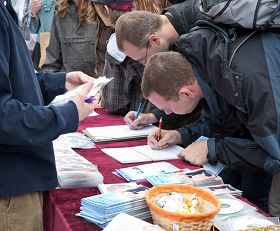 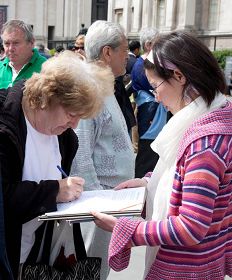 Olympic athlete: We must protest those who violate human rights 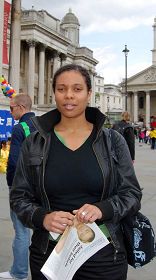 An Olympic table tennis player from France took part in the Olympic Games last year and is now studying in the UK. When interviewed, she said: "I am well aware of the issue of human rights violations happening in China. I have been to China several times and have many Chinese friends. I am very interested in anything about China and have also read lots of reports about China. We must stop those violations of human rights. 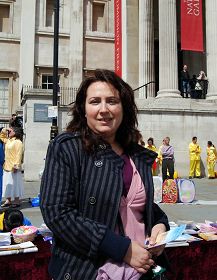 Learning English in London now, a Spanish lady watched the practitioners doing the exercises for quite a while. Then she walked to the table and signed the petition. She told the reporter in her non-fluent English, "Spain used to have a dictatorship, but the CCP regime is so horrible and bad that it wants to control everything about people, including their thoughts. I've heard of Falun Gong and accepted flyers about it when I went to Chinatown before. I wanted to know more about Falun Gong and was very excited when I saw Falun Gong practitioners today. I think that I will learn Falun Gong in the future. Too many things have happened in this world and people only value money. Falun Gong values Truthfulness-Compassion-Forbearance. It is very precious." 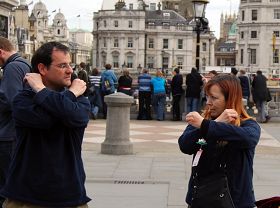 Sarah learns the Falun Gong exercises from a practitioner

Sarah, a Londoner, learned the exercises from a practitioner. She told the reporter that it was unbelievable that something as horrible as the persecution could be happening in China. People should unite, in her opinion, and put an end to it. Sarah said that she had heard of Falun Gong two years ago. Today she decided to learn it.

While the practitioners were doing the exercises, two young Chinese overseas students watched them carefully and quietly. A practitioner walked over to them with the petition form and asked them if they knew the facts about the CCP's persecution of Falun Gong and if they would like to sign the petition calling for an end to the persecution. They seemed somewhat hesitant. Considering how the CCP controls and persecutes Chinese citizens, the practitioner told them, "If you come from China, just sign it with a pseudonym." They immediately signed the petition.

A man from Shanghai in his fifties stood there listening to the practitioners sing As they sang "Coming for You," he heard: "Facing violence and danger, we have come for you again and again because we love you, precious Chinese people. Do you know the whole world says 'Falun Dafa is good! Falun Dafa is good!' And never miss the rare opportunity...." The old man listened carefully. A practitioner went up to him and explained the facts to him. At first, he remained silent, but slowly he started to talk with the practitioner. When the practitioner told him that he should now know more about Falun Gong since he was overseas, he answered, " Yes, I should." On seeing the banner worded "Celebrate the 17th Anniversary of Falun Dafa's Public Introduction," he sighed with emotion, saying, "It has been 17 years." Later, he carefully read the poster boards and left with truth-clarification flyers and newspapers about Falun Gong and a booklet of the Nine Commentaries.

Falun Gong is very good. How can the CCP treat Chinese people like this?

An older man from Australia who was traveling in the UK watched the activities for a while. He talked with a practitioner and said that he had heard about the persecution of Falun Gong when he was in Australia. Because he could not understand why the CCP would persecute Falun Gong, he looked up many books about Falun Gong to find an answer. After reading these books, he has concluded that Falun Gong was very good. He could not understand why the CCP persecutes it. He said, "How can the CCP regime treat Chinese people like that?" He told the practitioner, "I know that Christians are also being persecuted in China, not only those who have a belief but also ordinary people are being persecuted by the CCP." 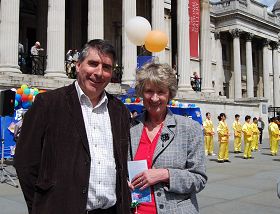 Howard and his wife, Jane

Howard, a farmer, and his wife Jane, who live north of London, both signed the petition. Howard told the reporter, "I am a firm defender of human rights. It is hateful for the CCP to remove organs from living people for lucrative profits." Jane added, "I feel that Falun Gong is very peaceful--their way of protesting is peaceful as well." 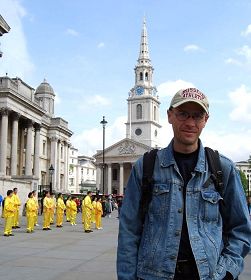 Yusuf is a middle aged man from the Czech Republic who was traveling in London. Having experienced totalitarian communist control, he understood the evil nature of the communist party. He thought that the international community should investigate the CCP atrocity of removing organs from living practitioners, and he supported practitioners in striving for their human rights and stopping the persecution.

“The Jakarta Post (Indonesia): Ancient meditation takes to the streets”