On the morning April 29, 2009, Mr. Chen Changyuan, a practitioner from Chongqing City, was tried at the Gaoxin District Court in Chengdu City, Sichuan Province.

Outside the courthouse, there were numerous police officers and plain-clothes agents on full-alert. It was as if the Chengdu City Gaoxin District personnel, the police department, the judiciary department, as well as the procurator were expecting an attack from a formidable enemy. 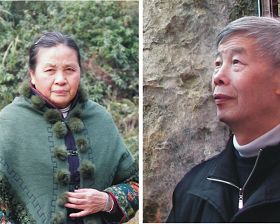 On the morning before the trial, two miles away from the courthouse, marked and un-marked police vehicles as well as police officers, plain-clothes police, 610 Office personnel, and agents from the Neighborhood Administration Office were patrolling the area in an effort to prevent practitioners from distributing Falun Gong fliers and other truth-clarifying materials. Around 11:30 p.m. there were still at least four police vehicles parked near the courthouse and three with flashing lights a few blocks away. 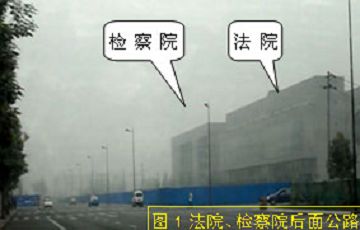 On the day of the trial, several police vehicles were parked in front of the courthouse and about twelve officers were patrolling the immediate area (approximately 200 x 100 yards). Some officers video-taped passersby. If anybody stopped for even a brief moment, the officers yelled at them and forced them to move along.

As soon as Mr. Chen Changjun and his wife, Ms. Yan Guang, passed by the front gate of the courthouse, they were arrested. Even people standing in front of a supermarket two miles away were told to move. In addition, the Chengdu City Engineering Corporation and Research Institute assigned security guards to wait near the courthouse and to coordinate with police officers to arrest Mr. Xie Deqing, the elder brother of Mr. Chen Changyuan and his wife, Ms. Yu Qinfang. On May 1, 2009, the Employees' Relatives Committee notified their family members to take some clothes to the couple, but they did not clearly tell the family where the couple was being held.

Mr. Xie, 69, and Ms. Yu, 67, retired employees of the Chengdu City Engineering Corporation, live at No. 188 East Qingjiang Road in Chengdu City. Since they began practicing Falun Gong in 1996 and conducting themselves according to the principles of Truthfulness-Compassion-Forbearance, all symptoms of their previous diseases have disappeared and their health has greatly improved.

Because of their steadfast faith in Truthfulness-Compassion-Forbearance, they have been spied on, tracked, and had their personal belongings confiscated. They were also fined, sent to brainwashing centers and detention centers, and had their home ransacked on numerous occasions. In addition, they had to leave home for long periods of time to avoid being arrested and harassed. Their former employer began withholding their retirement pension in March 2009.

Since July 1999, the secretary and deputy secretary of the Chinese Communist Party (CCP) Committee of the Chengdu City Engineering Corporation, as well as the director of the Security Division of the Organization Department, and the director and officers of the Retirement Department actively followed the CCP's directives in persecuting practitioners. For example, practitioner Mr. Zhu Xuezhi, an employee of the company, was beaten until his leg broke and then he was taken to the Wumaping Prison in Leshan City, Sichuan Province. Fellow employees who practiced Falun Gong were likewise abused and some were even forcibly confined.

“True Belief Has No Precondition”