(Clearwisdom.net) On May 16, 2009, Falun Gong practitioners from Austria and surrounding countries gathered in the world capital of music - Vienna. At the Stephanplatz, a well-known site in downtown Vienna, they held an event to celebrate the 10th World Falun Dafa Day. 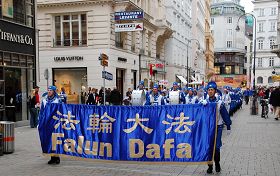 A parade led by the European Divine Land Marching Band 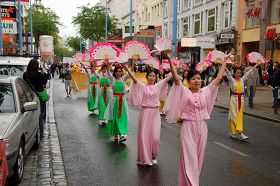 Celestial maiden's dance in the parade. 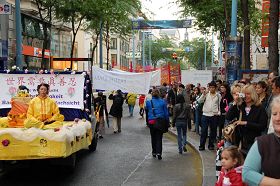 Falun Gong practitioners demonstrate the exercises on a float. 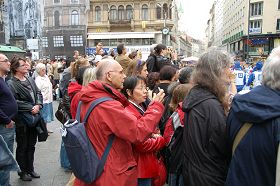 The parade attracts tourists from all over the world and local residents.

Ms. Karin Resetarits, an Austrian parliament member, also sent a greeting and called for an end to the Chinese Communist regime's persecution.

The celebration started at 11:00 a.m. and began with the magnificent music of "Falun Dafa Is Good" performed by the European Divine Land Marching Band.

At noon, the parade started off. It was led by a huge banner that read "Falun Dafa," followed by the European Divine Land Marching Band. Next were the celestial maiden dance team, waist drum team, exercise demonstration, anti-torture display, etc. The parade started from the busy Stephanplatz square, passed through the Heldenplatz, then Museumsquartier and Maria Street, to the terminal at Naschmakt where Chinese often gather in Vienna. The celebration lasted until 6 o'clock in the evening.

The parade drew the attention of many tourists from all over the world and local residents. Many people asked about the situation of the brutal persecution of Falun Gong by the CCP in mainland China. The people appeared impressed by the Divine Land Marching Band's performance and many people took photos. It was the first time for the European Divine Land Marching Band to visit Vienna, and it was warmly received in the capital of music on the special occasion of World Falun Dafa Day.

“Western Practitioner: Integrating Falun Dafa's Principles with My Work as a Behavioral Therapist”