(Clearwisdom.net) On May 17, 2009, the annual Spring Parade was held in Birmingham, Michigan, a city with of 180 years of history. Falun Dafa practitioners of the Detroit metro area participated in the parade for the first time. 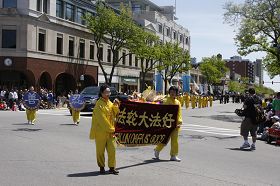 One of the organizers of the event, Mr. Bob Fox, has been working with the parade for ten years. "The parade is to celebrate our hometown, Birmingham, and to celebrate spring. This year we have 45 participating groups for a total of about 300 people in the parade. The parade displays the cultural diversity of our city. We are very happy to have the Michigan Falun Dafa Association join the parade this year. "

The Falun Dafa procession was led by a large banner that read "Falun Dafa" and "Truthfulness Compassion Forbearance," followed by a float decorated with lotus flowers and practitioners demonstrating the five sets of exercises. Behind the float was a colorful flag squad.

Along the parading procession, a few practitioners passed out truth-clarification materials to the spectators.