Ms. Huang Li-hwi is the deputy group leader of "The Multilateral Trade Group" at the International Trade Bureau in Taiwan's Department of Economics. In May 2003, Ms. Huang was recognized and honored as a Model Governmental Worker of the Year. This award, given to only 60 out of hundreds of thousands of government workers in Taiwan who have made special contributions to the country and society each year, is the highest honor.

Certificate for recognition as a "Model Official"

Cao Qingcong started practicing Falun Gong in July 1999. He used to suffer from many diseases. After he resigned from the army in 1996, he developed gastro-intestinal problems and suffered duodenal and gastric ulcers, liver fibrosis, and depression. This went on for six years. He was very depressed and irritable. He smoked and drank all the time. As a result, he suffered insomnia and could not sleep without taking sleeping pills. He was truly miserable. 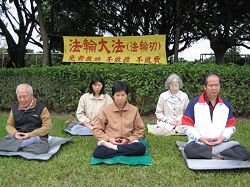 Mr. Cao gained a second life after learning Falun Gong. Ten years ago, he applied for early retirement. On his first day as a retiree, he went to Fahe Sports Park and was attracted by peaceful music. He followed the sound and found a Falun Gong banner. There he learned the exercises. When he got home, he started reading the book Zhuan Falun.

After attending the nine-day Falun Gong video lectures, Cao Qingcong quit smoking and drinking and focused on learning Falun Gong. Three months later, when he was eating some sour, spicy, and cold food, he suddenly realized that his stomach problem had disappeared. One year later, all of his diseases, such as duodenal and gastric ulcers, and liver problems, were cured without any medical treatment or a liver transplant. And he no longer needed sleeping pills. Dafa's extraordinary power and magnificence are manifested in him.

Cao Qingcong said that Teacher gave him a second life. Now he is very strong, healthy, and happy. Consequently, his family life is harmonious. His children are very well-behaved. Seeing the changes he underwent, all of his neighbors were amazed.

In 2006, Cao Qingcong was honored as the "Outstanding Father" in Yonghe City, Taipei County. In 2007, he once again earned the "Model Father" award in Yonghe City. When interviewed by a local TV station, he told the reporter, "Cultivating in Falun Dafa gave me a new life. I became a better person. Practicing Falun Dafa let me become a better husband and a better father." 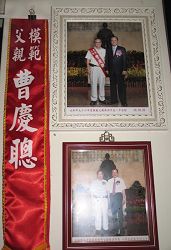 Cao Qingcong was awarded "The Outstanding Father" in 2006. He and the mayor of Yonghe City, Taipei County

Cao Qingcong said that he was very grateful for Dafa. He has been to many tourist attractions in Hong Kong many times to clarify the truth to tourists from mainland China. One time when he was clarifying truth at the "Luomazhou" scenic site in Hong Kong, a policeman asked him, "How much do they pay you? How much can you earn in one day?" Cao Qingcong replied sincerely and with all seriousness, "We are all volunteers. No one pays us anything. We come here at our own expense for one purpose--to let people know the truth about Falun Gong and about the persecution happening in China so that they will not be deceived. Good will be repaid with good and evil will be repaid with evil."

He then talked about the fabricated Tienanmen Square self-immolation incident and the CCP's harvesting of organs from living Falun Gong practitioners. After learning the truth, the police officer became more friendly and told him that he did not take the informational materials because he was on duty. He would come back after getting off work. Several months later, when Cao Qingcong once again went to Hong Kong Huangdaxian scenic site, he clarified truth to a young policeman. The officer not only learned the truth, but also said that he wanted to visit Taiwan. Cao Qingcong told him that if he went go to Taiwan, he definitely would be his tour guide. They became good friends. What's more, they all learned the truth about Falun Gong.

Ms. Lee Min-yu is a teacher at MingYih Elementary School in Hualian County. In September 2003, she was honored as an "Extraordinary Teacher" in Hualian County. This is a major annual event organized by the Bureau of Education to encourage teachers' professionalism. She was selected to receive this honor with the highest score of all the recommended teachers in the county. Each school could only recommend one or two teachers to participate in this evaluation.

Lee Min-yu was honored as an "Extraordinary Teacher"

Shieh Shen-shan, the County Magistrate of Hualian, presents the award to Lee Min-yu.

“Cultivation Is a Serious Matter”

“Canada: Minister of Transport John Baird Brings Greetings from the Government of Canada to the 2009 Canada Falun Dafa Anniversary Celebration”