(Clearwisdom.net) The "Quitting the CCP and Spreading the Truth Tour" set off on May 2, 2009 in Chicago's Chinatown. The event was initiated by the Mid-US Service Center for Quitting the CCP, to support the 54 million Chinese people who have quit the Chinese Communist Party (CCP) and its affiliated organizations. The tour is scheduled to visit 14 cities. So far, it has been to Milwaukee and Madison, Wisconsin, and Minneapolis, Minnesota. Wherever they went, the volunteers in charge of local quitting the CCP activities would hold a rally. People from all walks of life also expressed their support. 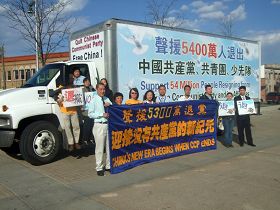 "Quitting the CCP and Spreading the Truth Tour" arrives in Milwaukee, Wisconsin

On the morning of May 3, 2009, a rally supporting quitting the CCP was held in front of the State Government Building in Madison. Ms. Sharon Remer, Mr. Tim Gebhart of Madison, Thubden Sangha, President of the Wisconsin Tibetan Association, Dr. Xu Zhiwei, representative of the Mid-US Service Center for Quitting the CCP and Mr. Zheng, who personally experienced brutal persecution by the CCP in China, spoke at the rally. Mr. Dave Cieslewicz, Mayor of Madison, sent a congratulatory letter to the rally.

Ms. Remer said that the CCP's human rights record has long been infamous, particularly, its persecution of Falun Gong, which has persisted for ten years. She cited alarming data that illustrated persecution cases against Falun Gong practitioners.

She said that there are many reasons for people to quit the CCP and its affiliated organizations, but if you want to find a reason, you only need the following words, "brutal and inhumane persecution."

Mr. Tim Gebhart remarked that the reason that he came to support the quitting the CCP activity is because the CCP has no regard for human life. Looking back at the CCP's history, the CCP and the Nazis are much the same.

He especially cited numerous facts documented in the investigative report "Bloody Harvest", jointly authored by Canadian human rights lawyer David Matas and former Canadian Secretary of State for the Asia-Pacific region David Kilgour. He said that the CCP incarcerated innocent Chinese people, harvested their organs while they were still alive and sold them for profit. These Nazis-style atrocities are prevalent in China. People have thought that such horrible crimes would not occur again. The CCP's atrocities won't be covered up forever, he added.

Tim Gebhart continued by saying that people have been awakening, and the CCP has to face up to the monstrous crimes it has committed.

Mr. Gebhart concluded by saying that spring in China won't really come until the cold winds of the CCP's corruption retreats and those unlawful people are brought to justice. For those who are still members of the CCP, he advised them to quit the CCP in the name of human rights and conscience, and no longer be associated with the CCP.

Thubden Sangha, president of the Wisconsin Tibetan Association said that the Tibetan community supports the rally for quitting the CCP, because the Tibetan people have also long been targets of persecution by the CCP.

Mr. Dave Cieslewicz, Mayor of Madison, sent a congratulatory letter to the rally. He stated that he acclaimed the residents who took part in the rally today, because they are letting the world know about all kinds of acts against human rights under the Communist totalitarian regime.

Mayor Cieslewicz also stated that this activity provided an opportunity to appeal for those who have been directly and indirectly subjected to the CCP's persecution, such as Falun Gong practitioners, Tibetans, Vietnamese and people of Miao nationalities, although they themselves were unable to speak out about the persecution they were suffering at this moment. He said he supports their efforts to make the world a more just and fair place. Their efforts will help everybody to enjoy basic human rights, and live a life that is more open and full of dignity.

According to Dr. Xu Zhiwei, initiator of the "Quitting the CCP and Spreading the Truth Tour," after Minneapolis, the group will head for Des Moines, Iowa, Kansas City, Kansas, St. Louis, Missouri, Springfield, Illinois, Indianapolis, Indiana, and Cincinnati, Columbus, Cleveland and Toledo in Ohio. They will complete the van tour in Detroit, Michigan.