On April 25, Falun Gong practitioners from Melbourne held an activity downtown--forming a Wall of Truth, clarifying the truth about Falun Gong, and commemorating the "April 25" Appeal. 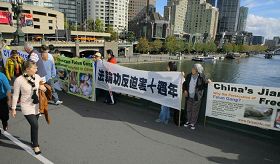 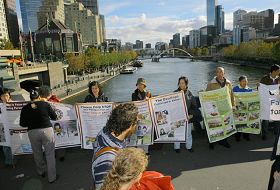 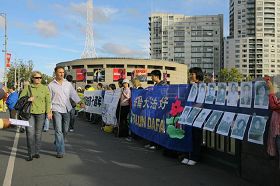 Ms. Wang, a practitioner who attended the original April 25 Appeal in Beijing in 1999, shared her own experiences about the peaceful and legal appeal.

Many people, including a lot of Chinese tourists, saw the practitioners' Wall of Truth in Melbourne. They accepted the truth-clarifying materials and read the contents carefully. Some Chinese tourists videotaped the wall. Many Westerners expressed their support.