On April 26, 2009, Falun Gong practitioners in San Francisco held an exhibition on Portsmouth Square in Chinatown to commemorate the tenth anniversary of the April 25th appeal. They set up posters around the square and demonstrated the Falun Gong exercises. 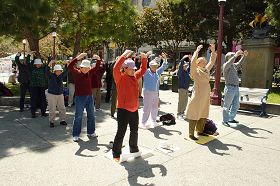 Falun Gong practitioners do the exercises 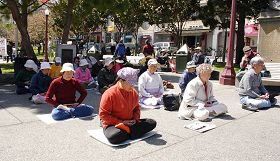 Practitioners do the exercises 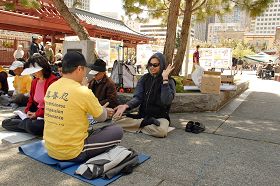 Teaching a passerby the exercises 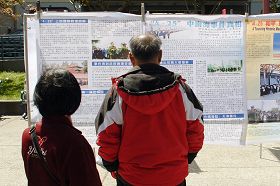 Passersby view the displays to learn about the persecution 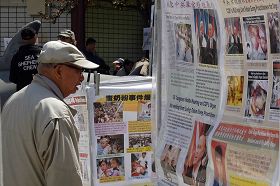 Passersby were shocked to find out about the CCP's violence

Mr. Zhang from Shanghai renounces the CCP after understanding the importance of quitting

Mr. Zhang from Shanghai viewed the posters for some time. He said, "The persecution of Falun Gong can only be described as unprecedented inhumane cruelty." He said that he knew about the Chinese Communist Party's atrocity of live organ harvesting. He has friends in the police and knew of some of the CCP's crimes. He said that the CCP persecution of Falun Gong is evil.

Mr. Zhang pointed out that it is in the very nature of the Communist Party to kill people. From the past to the June 4th massacre, he explained, the CCP periodically initiates a "movement.

" He said that his grandfather was persecuted to death in the Cultural Revolution just because he was a low level official before the CCP took power.

Mr. Zhang said that he read the Nine Commentaries on the Communist Party and quit the CCP and its affiliated organizations. He said that after understanding its importance, he quit the CCP right away.

Mr. Zhang said, "Many Chinese people are brainwashed by the CCP and don't know what is truly patriotic. China has a five-thousand-year-old history, but the CCP took power only a few decades ago. The CCP is not the same as China, that much is clear."

Some people learned about Falun Gong from practitioners' activities in Chinatown. Some of them have started to practice Falun Gong.

Chris said that he felt energetic after practicing and that it was his fifth time to practice the exercises.

Chris passes by the square often and saw the practitioners doing the exercises there. He said that he wished to have inner peace. After reading an introduction of Falun Gong on-line, he thought that this was a good practice and started to learn. He said that the persecution in China is absolutely wrong, and everyone should have the freedom of belief.

It is horrible to persecute such a peaceful practice

Lynn came to San Francisco to shop and was drawn by the peaceful exercises. She watched quietly and smiled. She asked one practitioner, "What are you doing?" One practitioner told her that it was Falun Gong and that the practitioners follow Truth-Compassion-Forbearance. She smiled and nodded.

The practitioner told her that it was the tenth anniversary of the April 25th appeal, that there was no freedom of belief in China, and that more than three thousand Falun Gong practitioners have been tortured to death since 1999.

Lynn was shocked saying, "It's horrible! It is unbelievable that this is just because of their belief. Thank you for telling me about this. I support your cause."