Community leaders from different circles in Taipei, Taiwan attended the performance by Divine Performing Arts (DPA) International Company at the Taipei International Conference Center at noon on Wednesday, March 1, 2009. DPA's exquisite performance received thunderous applause from the audience, and the performers answered two curtain calls at the end of the show. 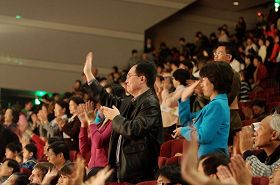 The Taipei audience gave the DPA performance thunderous applause at the end of the sixth show on Sunday afternoon, March 1, 2009.

A group of 170 people, including about 60 members of the two associations in the hardware businesses in Taipei County, and their relatives and friends, attended the DPA show as part of the annual arts and culture celebration. After the show, they took turns having their photos taken in front of the huge DPA poster. 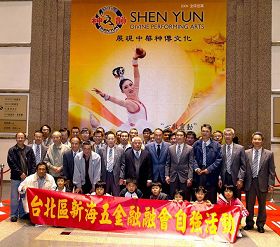 Some 170 people from the hardware businesses in Taipei County came to the DPA show together.

Tang Zhen, renowned vocal music educator was impressed by the performers' unity. She said, "Everyone aims for the same goal and works together to achieve it. For example, the Tibetan dance, Dance of the Snow-Capped Mountain manifests a unified spirit. Although each number is short, I can see the performers' solid fundamental skills and the great effort put into it." 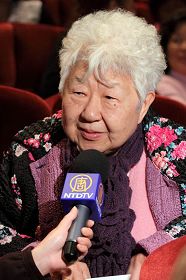 "I found each and every piece to be excellent and exquisite. They all express the essence of the Chinese culture properly. The most important thing is that in such a short period of time, they show us the most perfect production. I feel the artistic effect of the entire show is fantastic."

Well-known painter Yan Shengzhe said that the DPA show gave people a feeling of compassion. "After seeing the show, I feel that the show inspires people to love peace and freedom and to have a compassionate heart." 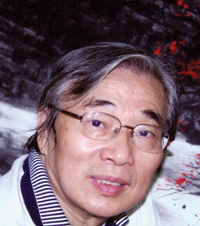 Mr. Yan was impressed by the backdrops and stage sets. He felt that the entire stage design was refreshing and lively. He commended the DPA show's artistic accomplishment as a whole, saying, "The music, colors of the stage sets, the dancers' costumes, coupled with the presentation through the medium of dance, are perfectly combined into an integrated whole."

Wang Ju-Hsuan, Minister of the Council of Labor Affairs, said that the DPA's magnificent presentation of Chinese classical dance was very moving. Along with others, she was moved to tears by the dance, Heaven Awaits Us Despite Persecution.

Minister Wang explained that what she learned in the dance-drama was that a family was persecuted by the Chinese communist regime due to the father's steadfastness in his belief. But, more than that, the mother and their child were also persecuted. Though the father was tortured to death due to his firm belief in Truthfulness-Compassion-Forbearance, eventually he was taken to heaven by gods. His family suffered deeply.

"I felt it was very touching. Through dance, the plot made the audience feel as if they were personally being persecuted. I think the show was very exquisite," she said. 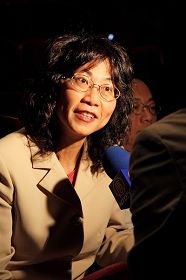 Minister of the Council of Labor Affairs, Wang Ju-Hsuan

Syu Chenrung, Vice Chairman of Taiwan's Overseas Compatriot Affairs Commission, attended the DPA show with his wife and mother-in-law for the first time. He was deeply impressed by the show. He praised the body language of DPA dancers and was moved by the dedication of the performers and choreographers. "Other shows do not contain cultural meaning but only technique. DPA has embedded China's 5,000 years of rich culture into its show. After watching it, I feel that preservation of culture is a responsibility of every one of us," he said. 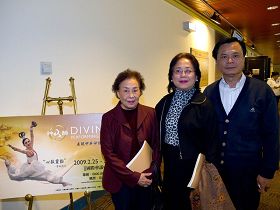 Mr. Sye said, "Relinquishing evil and promoting compassion are the ultimate purposes of life. The dance, Heaven Awaits Us Despite Persecution delineated the unjust treatment and even persecution of Falun Gong practitioners. I hope that the message of 'good is ultimately rewarded and evil is punished' can be passed on through DPA, particularly for elected officials to realize and become more compassionate and caring of the people."

As DPA is conducting a world tour, Mr. Syu said that it a positive role in promoting Chinese culture to the world. He believes that DPA is bringing mankind a more compassionate and brighter future.

Muzaffer Eroktem, Representative of the Turkish Trade Office, attended the show with his wife. He said, "We were very much impressed with everything. It was nice and very impressive. The artists were very gifted and talented, and the colors were beautiful. The view and stage performances were excellent." 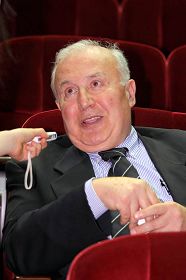 "Also, the costumes were very colorful and very nice, and in terms of everything it was a very joyful occasion. If and when I have a chance in the future, I would like to come to see this performance again. It was very good."

Finally, he said sincerely, "I congratulate the organizers as well as the artists for their excellent performance."