Ms. Clark, former Director of the Art Council of Greater New Haven and present member of the Cultural Affairs Commission, Development Commission, was deeply impressed by everything she had seen. "This [show] is absolutely magnificent. The beauty of the costumes and the music is just phenomenal." 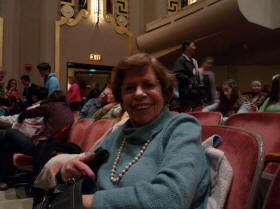 Ms. Clark, former Director of the Art Council of Greater New Haven and present member of the Cultural Affairs Commission

The stage design amazed Ms. Clark, especially the digital backdrops, "I'm also fascinated by the technology--utilizing the video, it's wonderful."

"I thought it was extremely moving," she said, reflecting on the deeper meanings in the performances, "I'm just beginning now to read about some of the meanings ... like reading about the millennia beginning, and the whole idea of an afterlife."

Referring to the piece about the persecution of Falun Gong practitioners in China, she said, "To see this one about modern China now, and how people are persecuted, and to also have faith and belief in something larger than yourself. This [show] can help to rescue people!"

"And I was just absolutely amazed at the instrument ... unbelievable. It was absolutely wonderful. That was a really high point for me, because I'm interested in music. I was very interested in this erhu because I could hear--especially in the upper registers ... how the original Chinese instruments sound, especially in how one note melds into the other. But I think it's very wonderful, because Chinese music is so totally different [than] Western music, and to see how it's been adapted for Western ears."

Ms. Clark was delighted, "I'm very interested in the audience. First of all, it's a huge audience, it's a sold out performance. And I see more Westerners here than Chinese or Asians, which is interesting. Lots of children, people are introducing their children to different cultures. It's wonderful. I'm thrilled."

"This Lovely and Rare Opportunity"

Ms. Roberts works for a private foundation at Yale University that helps fund various institutions, including the Rockefeller Cancer Institute. She heard about Shen Yun from a friend, "She let me know that this was happening and I am really pleased that she did. It was a beautiful program. We really enjoyed this. It was lovely."

Ms. Roberts added, "I liked the dance and the stories that they told, because it is rare to see any of that. It's just beautiful. I enjoyed all of it." She feels that seeing Shen Yun helps to explain what traditional Chinese culture is about, and seeing this show is a rare opportunity.

She continued, "The story telling--that's what I liked about it. I think that's a lost art for us. They are very good people and story tellers. I did not know the story of the Monkey King. It's interesting--some of the parallels with other cultures--some of the stories, coming to the same end, just a different path," she said. "I easily understood it."

"Because my daughter sings; she's an opera singer, we appreciate the arts. They did a beautiful job. The tenor and the sopranos--it was just very nice."

The More Shen Yun Comes to Hartford, The Better

One audience member, a Connecticut University professor who gave his name only as Mike, said the drums were "really upbeat and uplifting," while Mr. Whitney, an events promoter for Hartford, was excited by the loud drumming that contrasted nicely with the gentle parts of the show.

Mike teaches audio production for radio, and works as a reporter for the campus radio station. He recently attained his Master's degree in journalism. "I thought the production pieces were fantastic, the audio, the orchestra, the elements of it. It flowed nicely and fit the description and the actual content and everything that goes along with this, it was ... phenomenal," he exclaimed.

"I especially liked the drummers. That one is good, that was really upbeat and uplifting. It really got the energy flowing."

Mike elaborated the performance is "to let people know this is where we are going, to really hit them with something to get them excited and intrigued, and into the whole performance."

The professor continued, "We still have a lot of work to be done, but people are starting to see society as it should be, and everybody is being a little more open minded about things. This is a pretty diverse audience. Everybody should be open. It is important not to be closed minded to things."

Mike hopes it will return so that the people of Connecticut can continue to benefit. "Again, they continue to bring the performance back here to Connecticut. The more they come back here and convey this message, and this type of atmosphere, the better off."

Mr. Whitney, who works for Hartford's Convention and Visitors Bureau, said that "the color, the music, and the skill level of the performers--absolutely amazing! I liked the drums. And I did like the fans and flowers, just so colorful... I liked them both--the quiet stuff and the exciting stuff."

Because of his position, Mr. Whitney said he had seen a couple of Chinese plays over the years, but nothing could compare to Shen Yun. He added that the concept of preserving Chinese culture will continue to flourish, and that people who want to express that beauty through the performing arts will continue to do so, in spite of the suppression of the authentic, traditional arts by the Chinese communist regime.