(Clearwisdom.net) The Divine Performing Arts (DPA) International Company held seven shows in Taichung. Mr. Chen Yunyong, the vice chief of the Culture Bureau of Changhua County, came to the last show on March 9. He was amazed by the first program in the show-- "The Five Millennia Begin". He said: "The message that the show passed on is not only the contents of Chinese culture, but also the meaning of life. This program says that we are all from Heaven. Life is short. But in this short process, we know that gods are guiding us to do something meaningful." 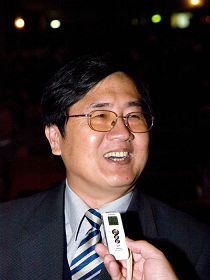 Mr. Chen Yunyong, the vice chief of the Culture Bureau of Changhua County

Mr. Chen said: "The last program-- 'Knowing the True Picture Offers Ultimate Hope' tells us that we will go back to Heaven. Gods have pointed out the way to us. Today, everybody has difficulties in daily life. After watching this show, we know that gods are always in our hearts. It helps us to face our problems."

"The program 'Heaven Awaits Us Despite Persecution' amazed me. Buddha will take those who have solid belief back to heaven. It also tells us that with Buddha in our hearts, we don't have to worry about the problems in daily life."

Mr. Chang, the chief of Chengte Culture Center and a musician, said: "The reason that the DPA show is different than other shows is that it is vivid and passes on messages from heaven." 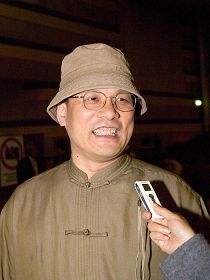 Mr. Chang expressed: "I was moved watching this show, which demonstrated the traditional Chinese culture in the modern world. I am not qualified to talk about cultivation, but I am trying to be a cultivator. There seems to be a voice calling me in this direction."

"I was touched and moved by the show. My conscience tells me that there is a correct way. I feel the existence of gods. I have been looking for the correct way and tried all kinds of cultivation methods. But I've never been so moved."

Mr. Chang highly praised actors' professional performances. "They performed with their hearts. I can tell they are not out for fame or money. This is rare. Their movements were so beautiful. It is like Buddhas are behind them, helping. The performances are like something from the heaven." 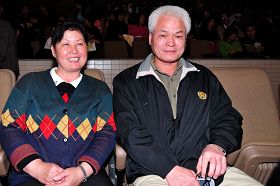 As a Buddhist, Mr. Liu said that show manifested true humanity. "The show is harmonious and touching. Every actor is professional. They performed with their hearts. The purity of the show deeply touched me."

Mr. Liu said: "One can do everything well, if he has the purity in his heart. One also needs to look inward."

"The show told us at the very beginning, we are from Heaven, but got lost in the everyday world. Once you find your Buddha nature, you can return."

Mr. Liu sensed the strong positive energy in the show. He said: "The director and the designer of the show must have reached a very high cultivation level. Only then could they direct and design such a wonderful show."