Established conductor and violinist Gregory Singer attended the second show of the Chinese New Year Splendor at Radio City Music Hall in New York. He was extremely impressed with the performance and said it was very beautiful, very dramatic, and the production and performers were magnificent. 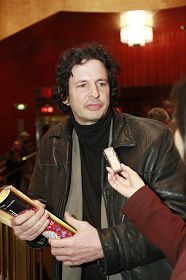 Mr. Singer said he really enjoyed the dances, and was very impressed with the Divine Performing Arts Orchestra, "Oh it's terrific, it's a wonderful orchestra. It's nice they use traditional music, the old instruments like the erhu. It sounds very pleasant." Mr. Singer said the dancers were very beautiful and graceful. He was also impressed with the way stories were told through Chinese classical dance--an ancient and expressive form of dance, rich in diversity--and he found the backdrops absolutely fascinating.Mr. Singer said, "The production presented ancient China. It's a pity that China is now too modernized. It would be good if China's traditional culture can be preserved. China has many ethnic nationalities and they all have different costumes, different food and music. I really love it."

Mr. Gregory Singer was born into a family with a rich music background. Both his grandfather and his father are well-known conductors. Aside from being a conductor, he is also a violinist and made his stage debut at the age of 11, performing the Wieniawski Violin Concerto. He has played with the Brooklyn Philharmonic, the Composers Orchestra and the American Symphony, numerous Broadway shows, ballets, operas, and the Columbia Artists Community Concerts series.

At age 22 Gregory Singer was appointed General Manager of the Naumburg Orchestra. He was also manager of the New York City Symphony. For 6 years Gregory worked as Director of Sales at Jacques Francais Rare Violins in New York City. Gregory has taught violin at the St. Thomas Choir School in addition to private lessons for 20 years. He also recently conducted a concert on February 1, 2009 in New York.

Mr. Singer said, "This is the first time I've watched the Chinese New Year Splendor, from which I can see the vast land of China. The production is great, the stage is magnificent and the performers are excellent. Figures came down from the backdrops and came onto the stage. It was very lively. The backdrops extended the stage further in distance. The orchestra is excellent. I really love the live orchestra accompaniment."

Mr. Singer said he particularly enjoyed the dance, "The Udumbara's Bloom," saying it was "very beautiful." "As soon as the curtains were drawn open, one could see magnificent and dignified Buddha figures. The legendary Udumbara flowers that blossom only once every three thousand years gradually opened, moving from far to near. The dancers are gorgeous, like flowers. They are very beautiful, very graceful."

The production is magnificent and incomparable

Mr. Singer also spoke highly of the male dancers, "The dance, "Dragon Springs Drummers" by the male dancers is very masculine. They look very strong and handsome. It reminded me of the five thousand years of Chinese history. I could see the magnificent scene of thousands of soldiers marching and fighting. China has a very long history, and has a galaxy of talent, with five thousand years of civilization. The production is magnificent, incomparable."

Mr. Singer said, "The Chinese Communist Party does not allow people a right to have their beliefs, it does not want people to have knowledge. However, one's belief is very strong and can resist the [Communist] government." 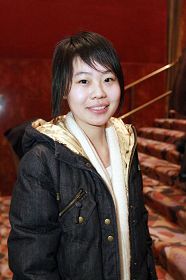 Tong Yan, Gold Award winner of the the 2008 NTDTV International Chinese Violin Competition, also came to watch the Chinese New Year Splendor. She said the production was excellent, particularly the backdrops, which she found to be very beautiful.

“Strengthening Sending Forth Righteous Thoughts to Disintegrate the Evil”

“A Retired Teacher Who Is Sympathetic to Dafa Twice Escaped Danger”