During last year's tour, the rental contract for the performance venue was canceled at the behest of the Chinese Embassy in Korea. As a result, DPA was unable to perform in Pusan. People in Pusan rented several dozen tour buses to make a special journey to the southern city of Daegu to fulfill their dreams of seeing DPA. This year, once again a long line of buses could be seen outside the theater in Daegu. They had transported audience members from Pusan and Changyuan and other remote cities who came for the DPA show in Daegu.

Recipient of a doctorate in music: Traditional Chinese art is right in front of us

Mr. Song, who holds a doctorate in music, is in charge of art performances at the Eulsuk Island Cultural Center in Pusan. He made a special trip from Pusan to Daegu to see the DPA show. He was very excited after seeing the show and said, "The show today is a very special experience, I'm really overjoyed! Through gorgeous costumes and dance movements, [the show] perfectly brings the traditional and diverse and rich Chinese culture to life. Traditional Chinese art is [presented] right in front of us. I feel extremely excited and satisfied. Each program has rich inner meaning, and the plot is full of ups and downs--very unique." 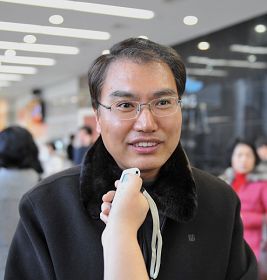 Mr. Song, who holds a doctorate in music, is in charge of art performances in Eulsuk Island Cultural Center in Pusan

Mr. Song highlighted the special features of DPA, comparing it with other performances. "The most impressive pieces for me are 'The Monkey King Triumphs' and 'The Poet's Vision.' Both performances are rich and amusing, very nice. I've seen many Korean dances, but today's performance is completely different from all others. The dancers have beautiful physiques, the costumes are incomparably brilliant and beautiful, and the body language is also very rich, coupled with the constantly changing screen background, all this is amazing," said Mr. Song.

He concluded by saying, "All the dancers are of the highest caliber, and the orchestra combines western and eastern instruments, which fully exhibits the potential of a Western orchestra, and also carries the rich characteristics of Chinese culture. It gives people a refreshing feeling."

Mr. Lee Dongrun, member of the Suseong-gu District Council in Daegu, attended the DPA show for the second year. He said that the content of the show was rich, excellent and could touch people's hearts. He said, "The stage arrangements are gorgeous and meticulous, with a dreamlike beauty. I can feel the clear message that DPA conveys." He hoped that the DPA show would spread traditional Chinese culture to the whole world. Mr. Lee also introduced the DPA show to his acquaintances this year, and said he would come again next year. 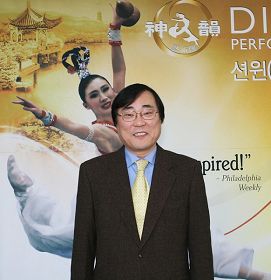 TV branch director: The DPA show provides an opportunity for designing my life in the future

Mr. Sun Zhengxuan, director of the Pusan Branch of the Korean Buddhist Television Network, attended the DPA show for the first time. He said that it made him very emotional. "I once saw a scene where relatives of families separated during the Korean War met with each other decades later through a TV program that helped people find their loved ones. When they met, they had no words, but only cried. Today, I had a similar feeling when seeing the DPA show. I could not hold back my feelings, so I had to keep applauding," he said.

Mr. Sun said that the show was rich and diverse. He enjoyed himself regardless of whether the scene depicted Chinese legends, culture and history, or portrayed life in modern times. He was deeply impressed by the messages conveyed through the lyrics of the songs. He especially appreciated contralto Yang Jiansheng's song "Pause to Notice." He was so impressed with it that he even remembered part of the lyrics: "On a hot day, I passed you a truth-clarifying [flyer], lies made you show resistance." Mr. Sun said assuredly, "This will become an opportunity for me to recall my life [in the past] and design my life in the future."

He also said that the final piece, "Knowing the True Picture Offers Ultimate Hope" was the most impressive. He was curious and wondered what the "true picture" is all about.

He concluded by saying solemnly, "I hope that the messages and culture that DPA conveys can help more people see, and help them know the fact that many people are spreading the truth in the world."

Dean of Education: Beyond imagination

Mr. Nan Huxie, Dean of the Daegu Ocean Training Center, an educational organization under the jurisdiction of the Daegu City government, attended the show and said, "Remarkable! I thought it was only a general performance before seeing it, but it turned out to be completely beyond my imagination--it is fantastic!" 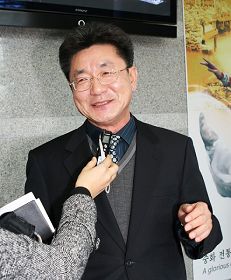 Mr. Nan was deeply impressed with the music and splendid costumes in the show. "The DPA music is based on traditional Chinese music, but there were no obstacles for me listening to it. The stage costumes and movements exhibited advanced skills. It had a sense of mystery and a kind of feeling that language fails to express," he said.

Former Director of a Neighborhood Office in China: I did not want to come, but unexpectedly, I'm overjoyed

Ms. Wang was a director of a neighborhood office in China. She said, "In the current circumstances in China, I could know nothing about divinely-bestowed culture, and legends. The DPA show let me see the things that I could not imagine before. China has such a beautiful culture, but I did not realize it. From the performers' costumes to dance movements and backdrops, everything was perfect. They are really amazing!"

Ms. Wang's friend introduced her to the show. Ms. Wang said, "The show is incredible. As soon as I entered the theater, I felt a kind of pure and righteous energy running through my whole body. Very comfortable, very nice!"

Ms. Wang was a little bit embarrassed, and said, "In the beginning, when my friend introduced the show to me, I did not really want to come, but out of respect for my friend, I came reluctantly, and I was late. Now I feel regret for not having seen the first part of the performance. The show was unexpectedly wonderful. I really want to see it again."

Overseas Chinese: The show purifies my heart and soul, I feel as if I was right on the scene

Ms. Jin is from China. She attended the DPA show and said that she felt the two-and-a-half-hour performance passed in a moment. She really wished the show could run slowly to the end. She also said, "In order to find the best position to watch the show, I bought the most expensive ticket."

Ms. Jin explained her impression after watching the first piece, "The Five Millennia Begin," "I was completely immersed with the performers on the stage, and was completely brought to the realm of the performers, as if I were no longer a member of the audience." She was also impressed by the drum piece. She said, "The drumming in the show filled me with joy and amazement as never before."

Ms. Jin continued by saying, "During the entire show, I was deeply impressed by the calm, pure and clean state of mind of the ancient people. From beginning to end, I felt as if I were right on the scene. My heart and soul were purified, and it was such a memorable experience. I think everybody should pursue the ancient people's pure and righteous realm."

Referring to the vocalists' performances, Ms. Jin was amazed that the singing could make her feel entirely happy. "The vocal artists' solo performances penetrated through my whole body, making me feel entirely at ease as never before. All the cells in my body vibrated with joy." Ms. Jin was also impressed with the costumes, saying that they were glistening, really magnificent.

Mainland Chinese Bride: I feel proud to be Chinese

Ms. Xiao, who married a Korean man two months ago, is from Liaoning Province in China where she engaged in architectural design. Accompanied by her husband, Ms. Xiao attended the DPA show. Ms. Xiao is sensitive to colors because of her profession. She had high praise for the colors used in the show. "An indescribable beauty, it seems that I have never seen them before, completely different from the colors I have used in my architectural designs. Each performance is lovable and wonderful," she said.

Regarding the traditional Chinese culture that the DPA show portrayed, she expressed her complete understanding and agreement. She said, "The biggest problem in mainland China now is the destruction of traditional culture and moral degeneration. Being Chinese, I feel great regret on this point."

The DPA show made her see hope. She finished watching the show with "great joy." She said, "I feel very proud to be Chinese, I hope people in other countries can also see and understand the DPA show."

Vice president of a famous high-tech company: A natural representation of divine beings coming down to the human world

Mr. Sun Bingyu, vice president of a high-tech company in Korea that has been a focus of the media recently for its environmental protection technology, said that the DPA show was life-like and extremely vivid, as if divine beings had come down to the human world. It was the highest quality of art.

Mr. Sun believes Korea and China share the same cultural roots. Many cultures in China have been introduced to Korea, so the Korean people can understand the inner meaning of the DPA show. He said that the entire show, whether the dances or lyrics, every part of it manifests pure kindness and pure beauty.

He continued, "The dances in the DPA show are highly skillful, integrated with high-tech stage settings, vividly representing heavenly paradises and divine beings, just like nature itself. 'The Five Millennia Begin,' made me feel as if I were part of the scene. It was as if divine beings came down to the human world, and through the medium of dance, spread divine culture to humanity."

“University Music Faculty Member: "There Was Just So Much That Came Across Without Words"”