Details about the Death Due to Torture of Mr. Gai Chunlin from Qingyuan County, Fushun City (Photo)

(Clearwisdom.net) Mr. Gai Chunlin from Bawanggou Village, Nankouqian Town, Qingyuan County, Fushun City, Liaoning Province, started to practice Falun Gong in December 1997. Before, he frequently became ill, so he could not work in the winter and was very sensitive to cold. After practicing Falun Gong, all of his diseases disappeared, his formerly bad temperament became gentle, and his whole family happily lived together in peace and harmony. 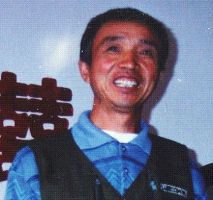 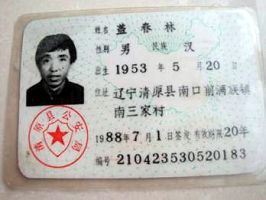 Mr. Gai Chunlin and his ID

On April 17, 2005, officers from the First Division of the Fushun Municipal Police Department, the Qingyuan County Police Department, and the Nankouqian Town local police station forcibly entered Mr. Gai Chunlin's home and arrested and took him to the Nankouqian Town Police Station. They later transferred him to the First Division of Fushun Municipal Police Department. Five days later Mr. Gai was taken to the Fushun Luotaishanzhuang brainwashing center, also called the "Guan'ai Education School." On May 6, Mr. Gai's family was informed that he had died from heart disease.

When Mr. Gai's family rushed to the scene, they saw Mr. Gai's remains were covered by clothes. Mr. Gai Chunlin's younger brother said, "My brother did not have heart disease, how did he suddenly die of it?" Then they saw the scalds on Mr. Gai Chunlin's distorted face and right chest and demanded an autopsy.

The autopsy results showed that Mr. Gai's lower esophagus had been cooked by boiling water and would peel off with the stroke of a finger, and his apex cordis (lower area of the heart) was white. These findings were consistent with intubation with boiling water. As soon as the family members saw this they realized that Mr. Gai had been tortured to death and refused to cremate Mr. Gai's remains. The so-called "medical examiner" from Fushun City declared that Mr. Gai had died a natural death, but he was unable to explain the wounds on Mr. Gai Chunlin's body. At that time, there were only two pieces of preserved vegetable in Mr. Gai's stomach. When his family members tidied up Mr. Gai Chunlin's belongings, they saw a very thick dust layer on his lunch box, which suggested that Mr. Gai had not been eating anything for a very long time.

Mr. Gai 's remains were deposited for 59 days at the Fushun Funeral Parlor. His daughter went to the Fushun Law Firm to hire an attorney but no attorney dared to take the case. Later, Wang Song from the Nankouqian Town government took over the case and gave Mr. Gai's family members 15,000 yuan, saying that, whether they took the money or not, Mr. Gai's remains would be cremated. Mr. Gai's younger brother-in-law, Mr. Li Jieli, handled the issue, and Mr. Gai's younger brother, Mr. Gai Qiulin, signed the cremation agreement. The whole procedure was rushed.

In mid-April 2005, the First Division of the Fushun Municipal Police Department, conspiring with officers from the Qingyuan County Police Department, dispatched 50 police vehicles with sirens blaring to Bawanggou Village, Gengjiabao Village, and Shipaidi Village in Nankouqian Town. Every place they stopped, they rounded up Falun Dafa practitioners from their homes, rushed in to confiscate their property, and made arrests. Local residents were panicked by their actions. More than 50 practitioners from Nankouqian Town were hunted down and arrested. The arrested practitioners were individually taken to court in turn, and Chinese Communist Party personnel beat them savagely with no regards for their age or gender. Each time a practitioner fainted from a beating, they would pour cold water on his/her head. Some female practitioners were beaten to unconsciousness at the scene and taken to the hospital for emergency treatment.