(Clearwisdom.net) Around 7 p.m. on January 16, 2009, Dong Huiqun from the National Security Division in Shuangcheng City, Heilongjiang Province, and Jiang Hongwei from the 610 Office, together with four or five other police officers, broke into the home of practitioner Mr. Jia Shuangyou and illegally arrested him and his wife, Jiang Xiuzhen. They were not given a chance to ask questions or even grab an overcoat. The couple even lost the slippers they were wearing in all the uproar. 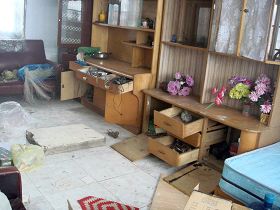 The police dragged them to the police car. They then ransacked the couple's home, taking their computer, printer, some personal items, and twenty thousand yuan. The couple have been detained in Shuangcheng City Police Station ever since.

Mr. Jia and Ms. Jiang are both around 50 years old. They lived just outside North Gate of Shuangcheng City. They were frail and had many illnesses before they began to cultivate. Ms. Jiang had chronic bronchitis, a rather prevalent illness in Northeastern China. She had a hard time breathing in the winter and had been suffering from this all her life. When she began to cultivate, like a miracle, the illness disappeared. She no longer coughed or wheezed. Witnessing this, both her husband and daughter began to cultivate.

Since the Chinese Communist Party began its persecution of Falun Gong in 1999, the couple have been arrested and detained several times. Once Ms. Jiang was jailed in Wanjia Women's Forced Labor Camp and Mr. Jia in Changlinzi Men's Forced Labor Camp at the same time, leaving their teenage daughter on her own. Missing her parents, along with all the terror she faced, she developed chronic depression, became very sickly, and suffered from many illnesses. She passed away on December 11, 2004, at the age of 22.