(Clearwisdom.net) An opening ceremony for the Truthfulness-Compassion-Forbearance Art Exhibit in Canberra Legislative Committee Hall was held on December 1, 2009. Canberra City Council member Brendan Smyth told exhibit viewers that the great compassion and forbearance demonstrated by Falun Gong practitioners in the face of persecution is very touching. He said, "We are fortunate that we have religious freedom in Australia. Anywhere in the world should have the same freedom. The Falun Gong practitioners' unyielding spirit deeply impressed me."

Canberra City Council member and Shadow Minister for Urban and Transport Services sent a support letter to the exhibit. In the letter, he condemned the Chinese Communist regime's persecution of Falun Gong and urged all governments to support religious freedom.

The exhibit includes nearly 50 artworks which portray the brutal persecution of Falun Gong and practitioners' peaceful resistance. Many visitors were moved to tears by the artworks. 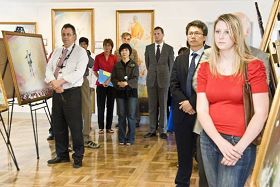 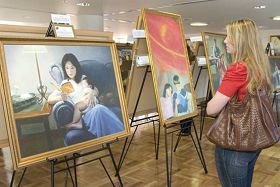 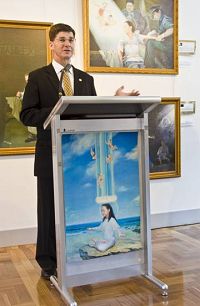 An Indian visitor expressed an interest in practicing Falun Gong after he listened to an exhibit guide's introduction.

One practitioner's relative had misunderstandings about Falun Gong for years and refused to learn about the truth. In the past, she would change the topic immediately when Falun Gong was brought up. However, because she loves art, she came to see the exhibit. After viewing the artworks, her attitude changed as she listened to the guides' explanations of the paintings.

A woman from Victoria cried as she admired the paintings. She said that all the artworks deeply impressed her. "These painting use heart, passion and the visual sense to communicate with viewers. They are great and moved everyone. It was a rewarding experience."