(Clearwisdom.net) From November 20 to 25, 2009, the International Truthfulness-Compassion-Forbearance Art Exhibition was held at the Neden Art Gallery in downtown Ankara, the capital of Turkey. Many people came to visit it each day. 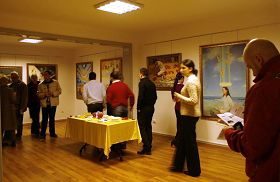 Many people come to visit the exhibition every day 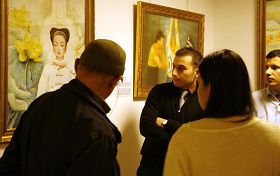 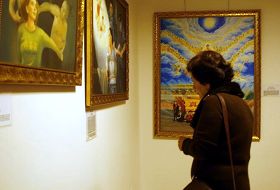 Carefully reading the explanations of the paintings 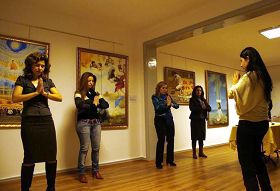 Ms. Sema Akbas, a well-known reporter from Sabah (Morning Post), one of three major newspapers in Turkey, visited the exhibition. She said that she was impressed by the goodness of Dafa demonstrated in the artworks, and the spirit of practitioners who remained faithful and unyielding even in the face of persecution. In reference to the paintings depicting the Chinese Communist Party's torture of Falun Gong practitioners, she said she simply could not believe how the CCP could so inhumanly persecute these kind people. 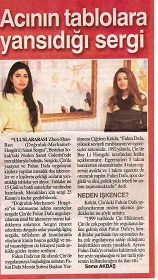 The article, entitled "An Art Exhibition Presents Pain in Paintings," was published in Sabah

Among the visitors was food engineer Feyza Yalcin. After spending a long time looking at each of the paintings, she told a practitioner that she had tears in her eyes when she read the explanations of all the paintings and that she really liked them.

Mr. Cagatay, an artist who teaches in a university art department, said that the paintings in the exhibition were superb and demonstrated advanced skills. He said that the works expressed compassion and hope and were really a feast for the soul and worth savouring carefully.