(Clearwisdom.net) Ms. Seo used to do floral art and design and was dean of a floral art institute. Ms. Ha was dean of an art institute. Five years ago, a common wish brought the two together. They gave up their ideal careers and ample incomes and set up an information site in the Myeong-dong shopping district in Seoul, South Korea, to call attention to and help stop the CCP's brutal persecution of Falun Gong practitioners. 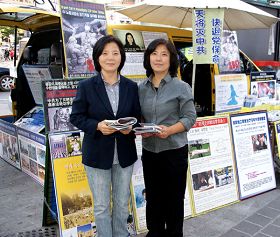 Ms. Seo and Ms. Ha continue to explain the facts about Falun Gong in the Myeong-dong shopping district in Seoul 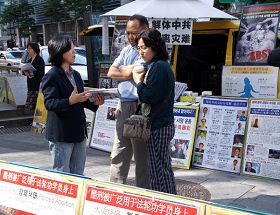 Explaining the facts of Falun Gong to tourists.

For more than five years, they've taken no holidays or vacations. From 10 a.m. to 9 p.m. every day, they set up the more than 60 poster boards in the morning and collect them in the evening, folding and distributing informational materials and explaining the facts about Falun Gong.

Going to the streets

Ms. Seo said, "We visited parliament, the foreign ministry, and media outlets and told them about the CCP persecuting Falun Gong, but they were elusive. A staff member at the Red Cross said that, among organ transplant recipients in South Korea, 80 percent had gone to China for organ transplantation. We visited members of parliament and told them about the CCP's atrocities of harvesting organs from living Falun Gong practitioners. We asked them why they kept silent about the this horrendous practice. One young MP was very concerned about the issue and said he would get more information. Others remained silent."

"Given the situation, we felt that we could not wait for them to do anything. We needed to take to the streets and distribute information to let people know the facts. This is one of the most effective ways to expose and stop the persecution."

"Reporters frequently passed by. They knew the facts about Falun Gong. Some told us, 'You are great to do this. We are a small country, so we don't dare to report on this issue. You are great to continue doing this. It is a shortcut to exposing the persecution and bringing it to an end.'"

Ms. Ha said, "Myeong-dong is a representative shopping street in South Korea. Our information site is located at a prime location in Myeong-dong. Many Chinese tourists pass here every day, so we selected it as a good place to explain the facts."

Ms. Seo said, "To explain the facts to Chinese people, we learned a few simple Chinese words: 'Hello, I am Korean. China is good. Falun Dafa is good. The Communist Party is bad.' Many tourists said to us with thumbs up, 'Good.' Some of them said, 'Falun Dafa is great!'"

"A Chinese student viewed the poster boards and said, 'These are true. I know. But how can I help you?' One of us told him, 'Please let your classmates and friends know the facts.' Some Chinese students were shocked after seeing the posters. They could not believe that these things are true or that the live organ harvesting is occurring in China. I was impressed with their surprised expressions. I also understood that by doing this regularly, more and more people will awaken. If all righteous people act together, more rapid and powerful righteous forces will gather to stop the persecution as soon as possible."

The main theme of their posters is to expose the CCP's atrocity of live organ harvesting from Falun Gong practitioners. Many Korean people know about it. 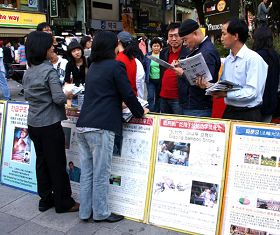 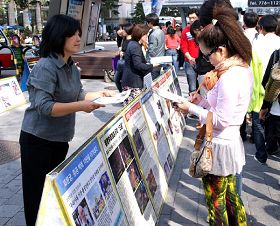 In December two years ago, a staff member of South Korea's National Intelligence Service and his wife passed by. They signed the petition calling for an end to the persecution after viewing the posters. He said that such things should not be happening. He also disclosed that South Korean students had been murdered in China. Although South Korean media reported the superficial reasons for the deaths, for example, suicide or murder, the real situation was not disclosed. Actually the internal organs of those victims had been removed.

A nun came to Myeong-dong Street recently and said excitedly after seeing the two ladies, "I see angels! Finally I see angels! This morning I knelt down and prayed again and again, 'Let me see angels today.' Unexpectedly, my wish came true. I really see angels. You two are angels."

Ms. Ha said, "Quite a few people ask us, 'How many years have you been doing this? When will you stop? How long will you keep this up?' Our answer is that we will do this until the persecution ends."

"To keep doing this until the persecution ends" is the angels' wish.

“Taiwan: Over Two Thousand Practitioners Call for an End to the Persecution During Events at Sun Moon Lake (Photos) ”