(Clearwisdom.net) On December 24, Chen Yunlin, chairman of China's Association for Relations Across the Taiwan Strait (ARATS), went to Sun Moon Lake for sight-seeing during his visit to Taiwan. More than 2000 Falun Gong practitioners held activities there, protesting the persecution of Falun Gong in China. 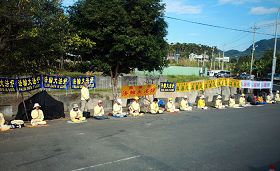 Practitioners held a protest in front of Chuntai Temple.

From the highway to Sun Moon Lake, practitioners were waiting for Chen Yunlin at every tourist spot. The Chinese Communist Party (CCP) officials saw practitioners' banners wherever they went. 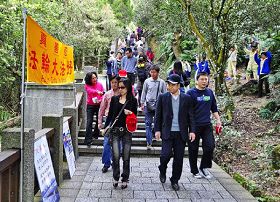 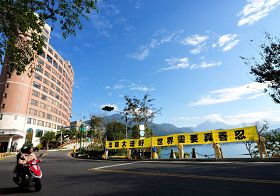 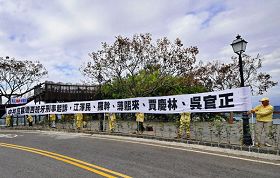 Practitioners' banners on the way to Riyuetan

Many tourists and reporters were impressed by the practitioners' efforts and expressed their support. 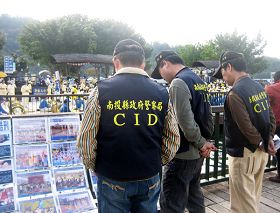 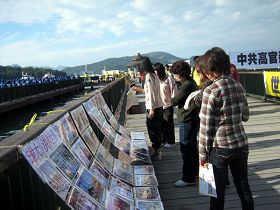 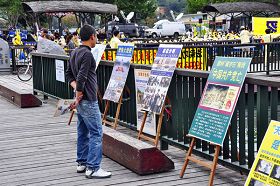 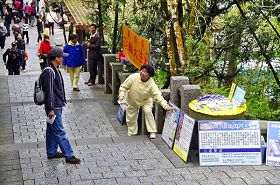 A practitioner clarifying the truth about Falun Gong to a tourist from China.

Many security guards and policemen saw the practitioners' activities. They were curious and talked to practitioners to learn more about Falun Gong and the persecution. This group of policemen all expressed their supporting and some of them were interested in learning the practice. One police chief helped practitioners hang up a banner and praised Falun Gong's principles of Truthfulness-Compassion-Forbearance.

Some policemen remarked that Falun Gong is a such a peaceful group, and if all protesting groups were like Falun Gong, then their job would be much easier. Some policemen guided practitioners to the best spots so that the CCP officials would see their banners. 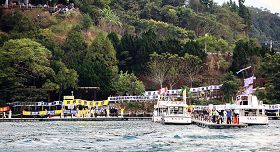 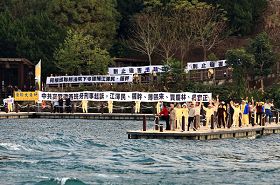 The Divine Land Marching Band performed at Dayishao Harbor, which attracted many tourists. Some local citizens brought hot water and fruit to practitioners, saying: "We have been watching you for several days. Your efforts are really touching and encouraging." Some people even joined practitioners in shouting, "Falun Dafa is good! Stop the persecution!"

“Taiwan: Over Two Thousand Practitioners Call for an End to the Persecution During Events at Sun Moon Lake (Photos) ”