(Clearwisdom.net) Ms. Jiang Xinbo, a teacher and Falun Gong practitioner from the Jiansanjiang Qianjin Farm, Heilongjiang Province, has been held for three months in the Jiansanjiang Detention Center. On September 10, 2009, Ms. Jiang was illegally arrested by Zhao Jun and Liu Jiazhong from the Qianjin Farm Police Department when she distributed DVDs of the Shen Yun Performing Arts show. That evening, she was forcefully taken to the Jiansanjiang Detention Center. On September 16, 2009, she was beaten severely because she tried to clarify the truth about Falun Gong to the guards. Afterward, she was handcuffed and shackled. 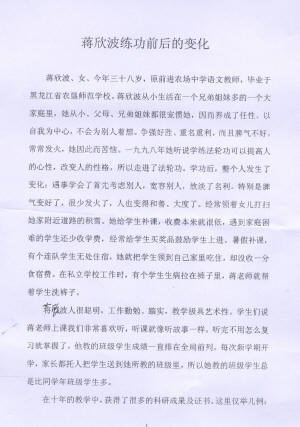 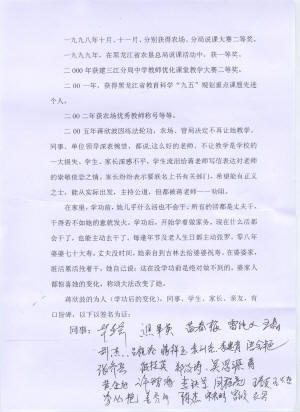 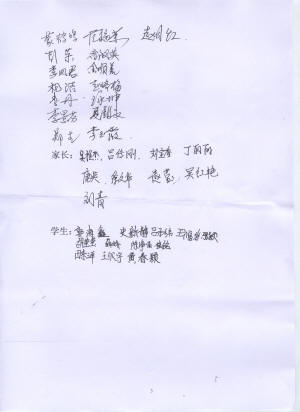 Many teachers and students at the high school where Ms. Jiang worked signed petitions calling for her release.

Ms. Jiang's family has been very worried about her situation during the past three months. Her daughter cried because she missed her mom. Her husband kept asking officials from different departments to allow him to visit her; however, they always used excuses to deny him visitation. Not until November 28, 2009, because of her husband's urging, could Ms. Jiang finally see her daughter.

After that, the family was not allowed to see her again. Officials said that Ms. Jiang's case was sent to the Jiansanjiang Procuratorate, and later stated that her case was sent to the Jiansanjiang Court and that the indictment had already been sent to Ms. Jiang. Chief Judge Yuan Pengfei replied to Ms. Jiang's husband that the juridical day was either December 2 or 3, 2009. Her husband wanted to hire lawyers; however, he was threatened not to do so.

Ms. Jiang's husband hired two righteous lawyers from Beijing. On November 30, 2009, he and the lawyers went to the Jiansanjiang Court to meet Yuan Pengfei, the chief judge. When the lawyers asked how to determine the nature of this case, Yuan said that he didn't know, because he had just returned from an out-of-town study, and that he needed to call others. Later, Yuan told the lawyers that the criminal charge was "using evil religious organizations to destroy the nation's law." When the lawyers asked who the operators were, Yuan said, "It's a secret." The lawyers wanted to meet the operators; however, Yuan told them that they were away and he would let them come the next day.

The lawyers returned to their hotel and received a call at around 9:00 a.m. The caller said he was from the Politics and Law Committee and asked where they were from and how much their salary was. The lawyers refused to answer. It was verified later that the caller was Yu Wenbo, head of the Sanjiang Domestic Security Division.

On December 1, 2009, the lawyers and Ms. Jiang's family returned to the court to meet Yuan Pengfei and the operator, and requested to see Ms. Jiang Xinbo. However, the people in charge shifted responsibility onto others, which caused the family to have to wait a whole day. Finally, only the lawyers were allowed to see Ms. Jiang.

On the afternoon of December 1, the lawyers and Ms. Jiang's family had an appointment and went to see Yuan Pengfei and Ding Lichang (of the civil court) to have a copy of the legal document. Yuan and Ding didn't show up; the lawyers and Ms. Jiang's family had waited a long time. Later they went to find Li Chunrao, head of the Jiansanjiang 610 Office. Li asked Ms. Jiang's husband why he had hired lawyers, where they came from and how much their salary was. Then Shi Ping, head of the Qianjin 610 Office, and Wang Yuhai, head of the Qianjin Middle School, came to the Jiansanjiang 610 Office. Wang Yuhai came to persuade Ms. Jiang's husband to go back to school. Li Chunyao and Wang Ping threatened him and demanded that he fire the lawyers.

In order to rescue Ms. Jiang Xinbo, her husband wrote a letter in which he mentioned his wife's significant changes for the better since practicing Falun Gong. More than forty colleagues from the Qianjing Middle School, who had worked with her before, signed petitions calling for her release.

However, at around 10:00 a.m. on November 2, 2009, Wang Yuhai, head of the Qianjing Middle School, held a meeting with the teachers who had signed the petition. During the meeting, Wang Yuhai cursed those teachers and cast a stone between Ms. Jiang and her former colleagues. Due to Wang's threats, those teachers became worried that they might lose their jobs. Then, Wang Yuhai forced them to write self-criticism papers, and required more than 1,500 words for each paper. In addition, Wang forced Ms. Jiang's husband to write a self-criticism paper and to fire his lawyers at the request of the Party committee secretary of Jiansanjiang and the Party secretary of Qianjin.

On December 4, 2009, Ms. Jiang's husband had to rewrite the paper because Wang Yuhai said that it didn't meet the requirements. Moreover, Wang threatened to have him fired if he did not fire the lawyers. That afternoon, Wang Yongze, the vice-principal of the school, held a plenary session and again scolded the teachers.