CCP Official Xu Guangchun Visits Taiwan, Practitioners File Lawsuit Against Him for His Role in the Persecution of Falun Gong (Photos)

(Clearwisdom.net) Former Chinese Communist Party (CCP) Henan Provincial Secretary Xu Guangchun visited Taiwan in mid-December. On December 15, 2009, the Falun Dafa Association of Taiwan filed a lawsuit against Xu in the Taiwan High Court for his role in the persecution of Falun Gong in China. On December 18, Xu went to Tapangu Village in Alishan. On his way there, Falun Gong practitioners lined the road, holding banners and calling out to Xu's motorcade, "Xu Guangchun has been sued in the USA and Taiwan. Stop the persecution of Falun Gong." 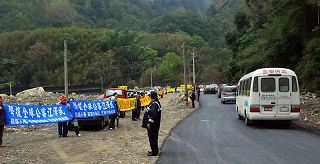 Practitioners displayed a number of banners with the messages, "Falun Dafa is great," "Commemorating more than 3,000 fellow practitioners who were tortured to death by CCP," "The CCP uses nearly one hundred torture means in the persecution of Falun Gong," "Support the global trial of Jiang Zemin," and, "Spanish Court indicts Jiang Zemin, Luo Gan, Bo Xilai, Jia Qinglin and Wu Guanzheng."

Mr. Liu, a Falun Gong practitioner who owns a tea business, said, "When Xu Guangchun was director of the State Administration of Radio, Film, and Television (SARFT), the CCP staged the Tiananmen self-immolation incident to frame and defame Falun Gong. Such a large scale fabrication was broadcast by all media in China. Xu was a direct participant in instigating hatred and fabricating excuses for the persecution of Falun Gong. Thus, we have filed a lawsuit against him. He has also been sued in the United States. He will be brought to justice."

Tian Chiu-jin, Member of the Legislation Council, called on the government to investigate the background of invited CCP officials, especially their human rights record and whether they have been involved in the persecution of Falun Gong.

It was foggy on December 18. The police on duty sent hot water to the practitioners and expressed their admiration for their peaceful and kind demeanor. When Xu's motorcade passed by, some inside the cars gave practitioners the thumbs up to show their support.

“Singapore: Rally against Torture and in Support of the Spanish Court's Indictment (Photos)”