Whether Ms. Fu Shaozhen of Wuhan City Is Alive or Dead Is Unknown

(Clearwisdom.net) Ms. Fu Shaozhen, 65 years old, is a Falun Gong practitioner in Wuhan City, Hubei Province. She was arrested on December 25, 2007, by the Nanhu District local police station when she was distributing truth clarification materials. Holding up display boards in front of banners, her oldest daughter in Hong Kong called for help from the international community to save her mother, Ms. Fu. 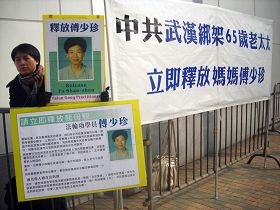 Ms. Fu's oldest daughter calling for the release of her mother

The Chinese Communist government and the local government of Wuhan City were intimidated by her actions. The National Security Bureau talked to Ms. Fu's sister and brother-in-law and claimed that the government was willing to pay them for a trip to Hong Kong and Macao so that they could persuade Ms. Fu's daughter not to publicize the incident. It was also promised that the government would release Ms. Fu immediately after the 2008 Olympic games. However, after the Olympics, Ms. Fu was not released. Not only that, the families were not allowed to appeal and Ms. Fu was sentenced to a three-year prison term. She was transferred to Baofenglu Women's Prison.

Since Ms. Fu's arrest, her younger daughter has not been allowed to visit her, the reason being that Ms. Fu "does not cooperate."

Ms. Fu Shaozhen has been persecuted many times. After 1999, she was first imprisoned in the Hanjiang Region Zuminyi Public Health Center and was forced to attend brainwashing sessions. Later, she was held in the following locations: the brainwashing center in Wuhan City in the No. 1 Hospital (it was the first brainwashing center in Wuhan City at the time), Wuhan City Jianghan Region Welfare Home brainwashing center, Wuhan Dongxihu Region Erzhigou Woman's Education and Detention Center, Wuhan No. 1 Women's Detention Center, Wuhan Jianghan Region Erdaopeng Brainwashing Center; and Wuhan City Hewan Region Forced Labor Camp. In 2001, due to brutal persecution in the Wunhan City Hewan Region Forced Labor Camp, she developed severe neurasthenia and was eventually released. After she was arrested on December 25, 2007, and detained in the No. 7 department of the Wuhan City Public Security Bureau, she was then sentenced to a term of three years. She was since then sent to Baofenglu Women's Prison.

Officials and organizations responsible for the persecution of Ms. Fu:

“Let's Not Allow Relationships to Affect Our Cultivation”

“Lawyer Hired to Investigate the Torture of Mr. Liu Yuhe at Jilin Prison”