(Clearwisdom.net) On December 13, 2009, Falun Gong practitioners from Sydney, Australia, participated in a rally and "Walk for Human Rights" held in Manly. They introduced Falun Dafa and exposed the Chinese Communist Party (CCP)'s persecution of human rights. 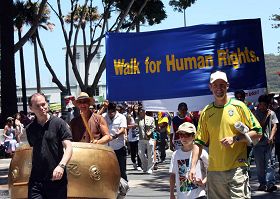 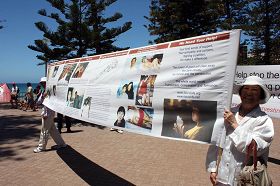 "Walk for Human Rights" in Manly 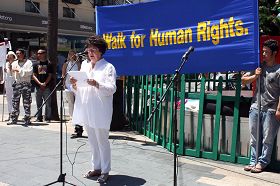 Mayor of Manly, Councilor Jean Hay, AM, attended the rally and gave a speech 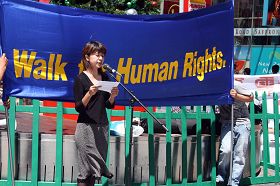 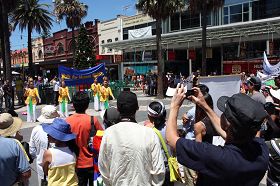 Visitors pay attention to the "Walk for Human Rights"

Manly Beach is a well-known summer resort. The rally and march, organized for groups severely persecuted by the CCP, was held near the beach at noon.

The message of the event was heralded on banners, reading: "Unlawful Persecution and Torture," "No Freedom of Speech and Belief," and "No Life Is Secure in China."

The procession started at the Manly Ferry Port, passed Main Street and the beach, and returned to Main Street. A rally was held then on Main Street.

Mayor of Manly Councilor Jean Hay, AM, attended the rally and gave a speech. She said, "The denial of fundamental human rights is hostile to the advance of civilization. The citizens of China today lack basic human rights. The Chinese government uses its power especially at the United Nations to stifle all criticism of its human rights' record. Human rights' atrocities are inflicted upon Tibetans, Falun Gong practitioners, Christians, and others at the hands of the Chinese Communist Party."

She pointed out, "Human rights and economic development are not opposed but move together. Sooner or later the Communist Party of China must surrender power over the lives of millions of Chinese. History dictates that. We must each do what we can to encourage the development of economic and political pluralism in China, above all for the sake of the Chinese people but also to build a better world with peace and respect for all human beings.:

Acupuncturist Doris Chen, who lives in Manly, also gave a speech in the rally. She said, "In May 2006, my mother, Zeng Aihua, a resident of Hong Kong, was arrested in Shanghai just because Falun Gong books and a CD of the Nine Commentaries on the Communist Party were found in her residence in Shanghai. In February 2007, she was sentenced to three years. She was imprisoned in Shanghai Women's Prison in April 2007. The first week after she was imprisoned, her high blood pressure went as high as 210/110."

Ms. Chen pointed out, "The CCP's arresting of Falun Gong practitioners has no lawful basis. The persecution of practitioners like my mother is unlawful, even according to Chinese law."

She continued, "My mother was released after three years of labor camp imprisonment. But at this moment, hundreds of thousands innocent Falun Gong practitioners are being persecuted. They are waiting for your help."

Tony Abbott, MP, Federal Member for Warringah and Federal Leader of the Opposition, could not attend but passed on his best wishes for the day.

Mike Baird, MP, NSW Member for Manly, also could not attend but sent a message which read, "I am proud this march is taking place in the community that I love. Everyone in Manly joins with us in the push for human rights that will lead to a better world."

“Psoriasis Miraculously Healed after Understanding the Truth about Dafa”