(Clearwisdom.net) On the afternoon of December 15 2009, accompanied by three human rights lawyers, the representative of the Taiwan Falun Dafa Association filed a lawsuit against Xu Guangchun, a retired high-ranking Communist Party Official who is currently visiting Taiwan, with the Prosecutor's Office of the Supreme Court of Taiwan. The lawsuit drew attention from the media.

In the evening of the same day, a Falun Gong practitioner served Xu, who was touring Taipei at that time, with the court papers. When Xu learned it was an indictment, he appeared frightened and left the site in a hurry. 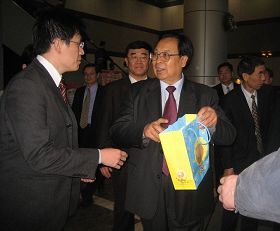 A Falun Gong practitioner handed the court papers to Xu Guangchun who was touring Taipei. 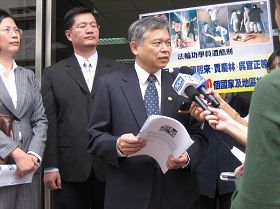 Director of the Taiwan Falun Dafa Association, Professor Chung Qingshi gives a statement on the lawsuit against Xu Guangchun, the former General Secretary of the Communist Party of Henan Province

This is the second time Xu Guangchun was served with a lawsuit while abroad. In July 2005, when Xu was leading a delegation visiting San Francisco USA, he was sued for "genocide" and "torture." One of the plaintiffs was a practitioner who was tortured in a forced labor facility in Henan Province. Based on published reports, Henan Province has established a complete system to persecute Falun Gong practitioners, including some hospitals involved in the organ transplantation business that harvests organs from incarcerated Falun Gong practitioners. An incomplete survey showed that more than one hundred Falun Gong practitioners were killed during the time when Xu Guangchun was the General Secretary of Communist Party of the province.

The lawyers stated that Xu will be the first one to be sued based on the International Covenant on Civil and Political Rights and the International Covenant on Economic, Social and Cultural Rights that Taiwan has recently joined. He is also the first high ranking official to be sued in Taiwan since Taiwan started economic exchange with mainland China.

Xu is one of the main criminals responsible for spreading hateful propaganda to sustain the genocidal persecution of Falun Gong.

Long before the persecution began, Xu was already spreading lies to frame Falun Gong. In 1996, under the order of Jiang Zemin's scoundrel political regime, Xu abused his authority as the Deputy Minister for CCP Central Propaganda to exert pressure on national mainstream newspapers, trying to force them to publish anti-Falun Gong articles. This clearly violated the "Three No" policy set by the state council. [The "Three No" policy is the policy set by the state council on the issue of freedom of belief. The three NO's represent "NO support, NO suppression and NO slanderous attack."] When this attempt failed, Xu used his own private connections within the Guangming Daily newspaper office to publish slanderous articles on Falun Gong in that newspaper.

After Jiang began his public suppression of Falun Gong in 1999, Xu further abused his power as the Minister for Radio and Television Broadcasting, and later as Head of State Administration of Radio, Film and Television. He used the television news media to attack Falun Gong with fabrications, slander, lies designed to incite hatred, suppression of public opinion, and blockades to prevent the appearance of truthful news reports, thereby poisoning the world's people.

Xu Guangchun assisted Jiang Zemin in the illegal persecution of Falun Dafa practitioners. He moved to Henan Province in mid-December to assume his position as Henan Province Chinese Communist Party Committee Secretary. At the end of January 2005, he became the Henan Province People's Congress Director. Xu gave the direct order and pressured the Guangming Daily to publish a slanderous article on Falun Gong in 1996. He is also directly responsible for the spread of malicious propaganda by CCTV's "Focal Point Interview."

Xu Guangchun, age 60, started out as a cameraman at the Anhui Province Reporting Bureau of the Xinhua News Agency. Because of close ties between Jiang Zemin and Xu's mother-in-law's family, Xu held strong allegiance to Jiang. Xu was transferred to the Shanghai substation of the Xinhua News Agency, and later followed Jiang to Beijing. After arriving in Beijing, he worked as the head of the Guangming Daily. A few years later he became the Deputy Minister for CCP Central Propaganda, and was eventually promoted to Minister for Radio and Television Broadcasting. Xu's wife, Han Wufeng, utilized his position to improve her own work status. As a high level official, she is extremely overbearing, causing many people to complain.

The biggest Guangzhou newspaper group corruption case occurred at the end of 2002, and a number of high-ranking officials involved in bribery were exposed to the public. Xu Guangchun was among them. The amount of money involved was astounding. After the exposure of his crime, Xu displayed increased loyalty and flattery toward Jiang, even removing money from a special fund with the help of Zeng Qinghuai in order to promote a certain female singer, known to be favored by Jiang. As a result, Xu was able to avoid legal punishment with Jiang's protection, and maintained his official title.

Xu was even more of a disgrace in the film and television industry. Many expressed dissatisfaction with his work. After only one year of work, Xu was fired from his position as Deputy Minister for CCP Central Propaganda and Head of State Administration of Radio, Film and Television, and was to be relocated in Henan Province. Still, Xu managed to manipulate reporters and publicly declared that the central committee was giving him a comprehensive inspection, implying that he would be entrusted with great power in the future.