(Clearwisdom.net) Under the invitation of WOIPFG (World Organization to Investigate the Persecution of Falun Gong) and Ms. Françoise Hostalier, Member of the French Parliament (MP), Mr. David Kilgour, Former MP of the Canadian Parliament, introduced his new book, Bloody harvest, on December 3, 2009 in the French Parliament. 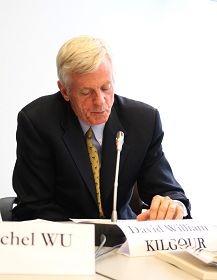 The new book, Bloody Harvest, was coauthored with Mr. David Matas. The books points out that the number of death-sentence inmates decreased significantly in China while the number of organ transplantations has remained at similar level in recent years. Though Chinese officials claim that the organ sources are from executed inmates, Mr. Kilgour and Mr. Matas believe that another major source for organs is from Falun Gong practitioners being persecuted by Chinese Communist Party (CCP). 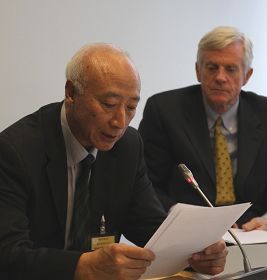 Senior media correspondent Wu Baozhang said in his speech, "In China controlled by a totalitarian regime, cruel organ harvesting is not new. When death-penalty inmates cannot meet the needs of market, Falun Gong practitioners are taken as the organ source.

"Facing such a human tragedy, it is shameless to keep silent for money, politics, or professional interest. This is especially so for those who claim to believe in our universal human values." 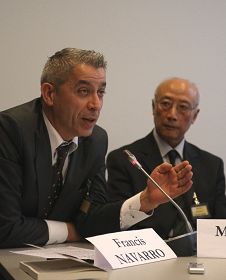 Dr. Francis Navarro, well-known organ transplant doctor and director of the Department of Transplantation, Montpellier Medical School, found out about China's live organ harvesting before he was invited to do surgical demonstrations in China. He thinks it is inhuman and violates the ethics of organ transplantation, so he refused. Later he started to investigate the issue more and reached the same conclusion as Mr. Kilgour and Mr. Matas in the book. He said the book is important for the forum and would focus the attention of French and European politicians on the organ transplantation issue. 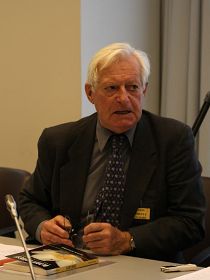 Mr. Yves Chapuis, Chairman of the French Medical Ethics Association, expressed his personal opinion, "I think this issue violates ethics. A country doing such a trade cannot be tolerated and must be stopped."
MP Jean-Marie Sermier believes live organ harvesting is a severe crime violating human rights. MP Valerie Boyer asked Mr. Kilgour how they could help in this issue. Mr. Kilgour called on French MPs to set up a "Friends of Falun Gong" committee in the parliament as exists in Canada to help stop the CCP's persecution of Falun Gong and enact laws to punish this illegal organ trade.

Several media outlets, Amnesty International and the World Association against the Death Penalty participated in the conference.

“Letting Go of Attachments and Being Diligent in Cultivation”