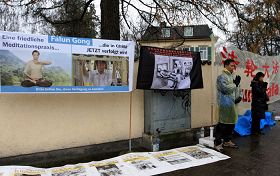 Despite the rain, Falun Gong practitioners protest against persecution in front of Chinese Consulate.

Falun Gong practitioners' activities have been held continuously for the past ten years, ever since the former head of the CCP, Jiang Zemin, launched the persecution in 1999. The brutal persecution has caused 3,336 confirmed deaths. Countless numbers of innocent people have been illegally detained and sent to forced labor camps, mental hospitals and brainwashing centers. The most appalling crime is the CCP's harvesting organs from living Falun Gong practitioners for profit.

Mr. Hans Duesberg, a preacher in a hospital, happened to pass the Chinese Consulate. He found out about the persecution and signed his name in support of Falun Gong practitioners. He said such atrocities must stop. He had read about the human rights violations in China in the newspaper.

Residents around the Chinese Consulate have a good understanding of the Falun Gong group. Artist Mr. Leitener and his wife live nearby and have witnessed the Falun Gong practitioners' protests. They feel it is a very peaceful group. They came over and signed the petition condemning the CCP's persecution. Mr. Leitener said, "We keep a low profile and stay away from trouble. However, we would like to sign today because if all this is true, it is an unprecedented crime."

Other groups protested the CCP's human rights violations in downtown Munich on the same day. The reporter interviewed them on the recent lawsuit in a Spanish Court against Jiang Zemin and other high-ranking Chinese officials for genocide and torture.

Mr. Dolkun Isa, Secretary General of the World Uighur Congress, said the lawsuit was great progress. He said Jiang and his assistants have killed many innocent people and should be counted responsible for the persecution of Uighurs and Falun Gong practitioners.

Ms. Dongels of the International Human Rights Organization in Munich said she had been following the news. She said the Spanish court could track international criminals overseas. "They must have felt a lot of pressure. We pray the human rights violators will be brought to justice in other countries. Those imprisoned in China have suffered more than we can imagine. It is an unprecedented crime in human history."