(Clearwisdom.net) Falun Gong practitioners in Chicago held activities at Lichaoling Square, on Chinatown's Yonghuo Street as usual on the sunny weekend after Thanksgiving Day, on November 28, 2009. They exposed the Chinese Communist Party's (CCP) brutal persecution of Falun Gong to the public, and told them about the Falun Gong practitioners who have remained steadfast in their beliefs in Truthfulness-Compassion-Forbearance during the past ten-years of opposing the persecution. They emphasized the news about the Spanish National Court's recent decision to indict five high-ranking CCP officials including former CCP head Jiang Zemin, along with Luo Gan, Bo Xilai, Jia Qinglin and Wu Guanzheng. These five defendants are charged for committing crimes of genocide and torture against Falun Gong. Many people showed interest in the information, and many Westerners took the initiative to sign the petition supporting Falun Gong, condemning the CCP, and calling for an end to the persecution. 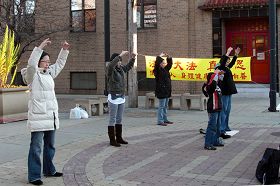 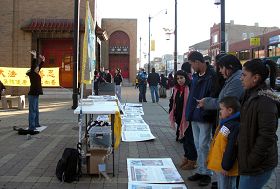 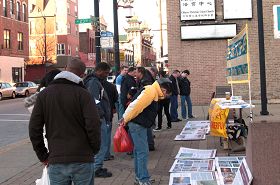 Passersby look attentively at display about Falun Gong and the persecution 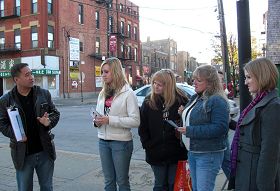 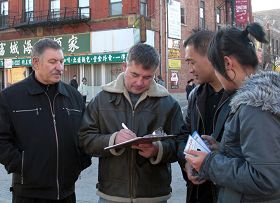 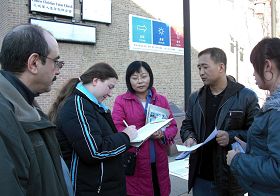 People sign the petition to stop the persecution of Falun Gong 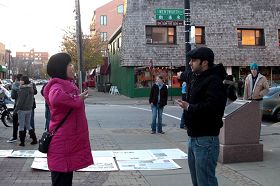 Young man learns the exercises at the event

Many overseas Chinese students came to celebrate Thanksgiving Day in Chicago, and passed by and learned about the facts of the persecution. Many took the book Nine Commentaries on the Communist Party and registered to quit the CCP, the Communist Youth League and the Communist Young Pioneers. Thirty-five Chinese, mostly young students, renounced the CCP and its affiliated organizations that afternoon.

“Validating the Power of the Fa While Truly Cultivating ”