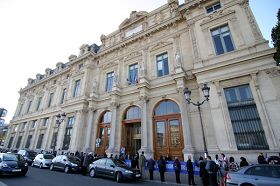 On the morning of November 5, 2009, NTDTV supporters hold banners in front of the Paris court to tell people: China needs NTDTV.

In the one and half-hour court session, lawyers from both sides presented their views to the judge and had a heated debate. The judge will examine the lawsuit and defense materials and issue a court decision on November 17. If NTDTV wins the case, the court will appoint technical experts to conduct an independent investigation on the real reasons of Eutelsat's interruption of NTDTV's broadcast signals.

Lawyer Mr. William Bourdon, representing NTDTV, said that materials from NTDTV were prepared very well, and he was confident that NTDTV will win the case. Lawyers from Eutelsat exposed their weaknesses. He said, "In my view, the situation is obvious. The lawyer from Eutelsat said, 'I am not afraid of the technical experts' investigation. It does not matter to us. But I definitely don't want this to happen.' I think this may make the judge feel very strange. If Eutelsat is really not afraid of the investigation, plus NTDTV has promised to bear the cost of the investigation, then why does Eutelsat spend so much effort to prevent the investigation from happening? Therefore, the situation is obvious. The experts' investigation is very important to both NTDTV and Eutelsat." 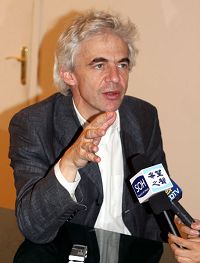 NTDTV is an only non-Communist-controlled Chinese TV channel broadcasting to China. Its mission is to provide Chinese people with accurate information and promote traditional Chinese culture. It was launched in North America in February 2002 and has extended its programs to cover Asia, Europe, and Australia since July 2003. NTDTV has over 200 million viewers worldwide and received praise from large number of viewers. However, in June last year before the Beijing Olympic Games, NTDTV broadcasts to Asia were stopped. Eutelsat has not restored NTDTV signals, claiming a technical fault. Investigation by Reporters Without Borders indicates that, in order to obtain economic interests from the Chinese Communist Party, Eutelsat interrupted the signal unilaterally. 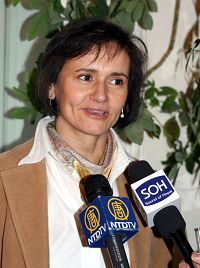 NTDTV spokesperson in France Ms. Chaigneau said, "Our lawyer conducted a very convincing debate, and the arguments are very strong. The lawyer of Eutelsat appeared inconsistent. I hope the French court can uphold justice, and let the real reasons of Eutelsat's interruption of NTDTV broadcasts be exposed to the world."

At 8:30 am on the day of hearing, NTDTV supporters and Falun Gong practitioners from various European countries gathered in front of the Paris court. They held banners with words urging Eutelsat to restore NTDTV's signal to Asia and distributed leaflets to passers-by. A lady who came out of the courthouse, after having read the leaflet, said, "I am a judge working here. You have done a very good job. I support you."