(Clearwisdom.net) This October, Israeli Falun Dafa practitioners held a variety of activities, that included widely spreading the goodness of Falun Dafa, exposing the crimes of the Chinese Communist Party (CCP) and the truth about the persecution of Falun Gong to Chinese people, and supporting the sixty million people who have quit the CCP and its affiliated organizations. 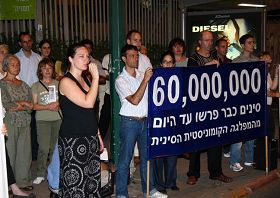 On the first of October, Israeli practitioners held an assembly in front of the Chinese Embassy to support the sixty million Chinese that have already quit the CCP and its affiliated organizations. The practitioners held banners at the activity that read, "Heaven Will Not Allow the CCP's Cruel Regime," "The CCP is not China," "Save Yourself by Quitting the CCP," "Heaven will Eliminate the CCP and Bless China," and "Stop the Persecution." A practitioner who spoke at the assembly said that they hope more people would become clear about the evil nature of the CCP and join the movement to quit the CCP's three organizations.

Another practitioner pointed out that the persecution of Falun Gong by the CCP is not only a persecution of the belief in Truthfulness-Compassion-Forbearance, but also a disregard for the universal values of humankind and an attempt to diminish the importance of moral guidance and the pursuit of the spiritual. "This persecution is worse than the persecution of Christians by the Roman emperor Nero," he said. "We must act in line with our conscience and say 'no' to the CCP regime."

On October 17, practitioners held a truth-clarifying activity on Rome Street, where Israeli Chinese live, in support of the sixty million Chinese who have already quit the CCP and its associated organizations. They also told the Chinese people there about the goodness of Falun Gong and the cruel persecution of innocent Falun Gong practitioners by the CCP. Some of the Chinese who understood the truth registered to quit the CCP right at the site. They said that they had already lost confidence in the CCP and that they just dared not to speak out. 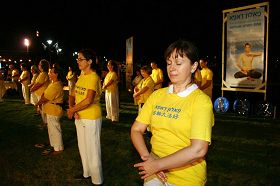 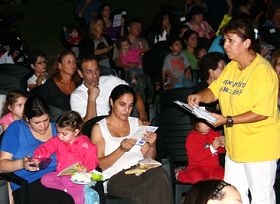 At nightfall on October 22, practitioners held a Fa-spreading activity at one of the largest shopping centers in Israel. They distributed informational booklets and also told people that since July 20, 1999, a terribly cruel persecution of Falun Gong practitioners has been taking place in China, a persecution all too reminiscent of the massacre of six million Jews by the Nazis. Passersby read the booklets carefully and listened to the practitioners' explanations. Some people then signed the petition calling for an end to the persecution. 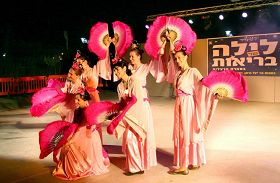 During the activity, the practitioners performed Chinese dance, which attracted much attention, and the spectators gave them rounds of applause. The practitioners also demonstrated the simple and peaceful exercises. Many of the observers were very interested in the exercises.