(Clearwisdom.net) On October 31 2009, Falun Dafa practitioners from the Chicago area gathered in Chinatown as usual to promote Falun Dafa, expose the truth of the Chinese Communist Party's persecution of Falun Gong, and help Chinese people quit the Chinese Communist Party (CCP) and its affiliated organizations. Twenty three Chinese people announced they were quitting the CCP that day. 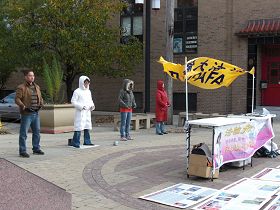 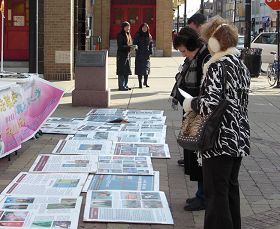 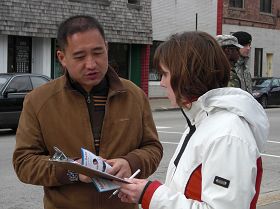 A westerner wants to help

The temperature dropped on Saturday and the wind was chilly. No matter how cold it was, the practitioners demonstrated the Falun Gong exercises along with the peaceful music. Many people watched the demonstration in the cold wind too. Some westerners were very interested in the exercises and were excited to learn that they could learn free of charge. Two military reserve officers talked to a practitioner, and one had been learning the exercises for a few weekends already. The practitioner told him that the exercises are for both mind and body. They can improve health, but it is more important to follow the principles of "Truthfulness-Compassion-Forbearance," and read the book Zhuan Falun to truly benefit from it. They said they understood.

Many Chinese people read the display boards carefully. One was reading the Nine Commentaries on the Communist Party and said to a practitioner, "Nine Commentaries is very well written. It is a great book!" He also said we should let more Chinese people read the book. A practitioner asked him if he had joined CCP or any affiliated organizations. He said he didn't want to join the Communist Party but once was the member of the Youth League. He agreed to let the practitioner help him publish a statement on the Epoch Times website to quit the Youth League. He also wanted to let his relatives in China learn the truth and quit the CCP.

Many Chinese people took the truth-clarification materials and fliers when they walked past the "Falun Dafa" banner. When practitioners were passing out the fliers, they also asked people if they had joined the CCP or its affiliated organizations. Some said they didn't even have a "Red Scarf" (Young Pioneer). Some old people didn't speak Mandarin, but many immediately agreed to quit the CCP. One lady quit the Youth League and said one of her friends was a party member and that she would talk to him about quitting the CCP.

There were total twenty-three Chinese who quit the CCP and its affiliated organizations on that day.

“Return Justice to My Father”