Australian Attorney: Jiang Zemin Could Not Be Absolved If His Crimes against Humanity Are Proven (Photos) 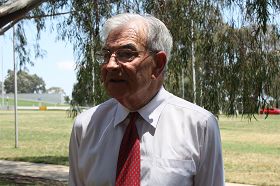 Mr. Greenwell said, "The suit against Jiang Zemin is instituted in a Spanish court. He is accused of crimes against humanity. They are a specific series of crimes under international law first developed in the trials of Nazi war criminals in Nuremberg and since been developed by various international conventions.

"So in this case the fact that the crimes were committed, if proved, in China, would not mean that Jiang Zemin could be absolved. Of course the Spanish courts will only take effect if they can get him within the jurisdiction and the territory of their state and that's where things stand."

He gave an example of Chilean General Augusto Pinochet. He said, "We are reaching a stage where heads of state can't assume that by virtue of the fact that they are heads of state that they won't be subject to criminal law. The international criminal court is trying to apprehend al-Bashir, who is the President of Sudan, for crimes against humanity and genocide in Darfur. He is now careful about what countries he goes to. And I think Jiang Zemin should be careful about going to Madrid."