(Clearwisdom.net) The 76th annual McDonald's Thanksgiving Day Parade in Chicago was held on State Street on the morning of November 26, 2009. The Mid-USA Falun Dafa Association was invited to participate in the parade as the only Chinese-American group. The association's giant Fa boat float stood out in the parade. 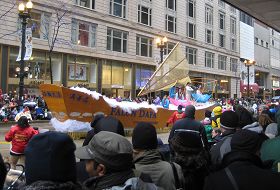 The McDonald's Thanksgiving Day Parade in Chicago and Macy's Thanksgiving Day Parade in New York are the only two parades broadcast to millions of households live. Enthusiastic crowds of parade spectators lined up along State Street in the morning. They cheered warmly as the Falun Dafa float passed by with practitioners demonstrating the exercises.

Dr. Yang Sen, Chair of the Mid-USA Falun Dafa Association, said that the float was created with more than one thousand hours of work by four practitioners in Seattle who are mechanical engineers, and with the help of other practitioners. The stately, gorgeous float was a wonderful addition to the parade.

“Global Coalition to Bring Jiang to Justice: Spanish Court's Decision Is a Benchmark for International Justice”

“The Meaning of Life Is Cultivation during Fa-Rectification”