(Clearwisdom.net) My name is Zheng Changzhu. I live in the Chenguang Building of Shuixi in Lunan District of Tangshan City, Hebei Province. On July 8, 2008, officers led by Chen Changdong from the Wenbei Police Station arrested my wife Zhao Yabin, and confiscated all the valuables in our home. After her arrest, the Tangshan City Lunan District Court sentenced my wife to seven years in prison. She was taken to Shijiazhuang City women's prison. 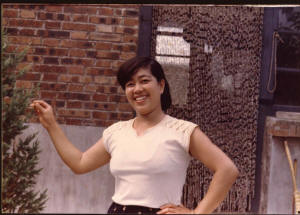 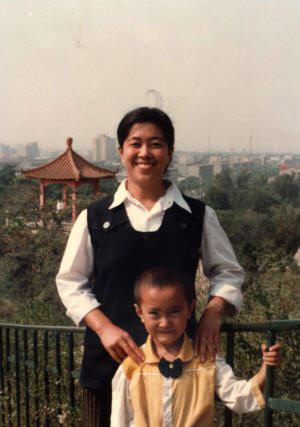 Zhao Yabin with his son

My wife Zhao Yabin was involved in an unfortunate automobile accident back in 1994. She suffered three torn ligaments in her leg. Three surgeries were unsuccessful in repairing her leg, and from then on she limped whenever she walked. In 1996, after learning Dafa and practicing the exercises, her left leg returned to normal. Those around her witnessed the wonders of Dafa, and many began practicing Falun Gong.

On the afternoon of July 8, 2008, officer Chen Changdong of the Tangshan Wenbei Police Station and secretary Guo Yujuan of the Wenhuananbei Street Residence came to our home to harass my wife. The incident occurred without justification or legal warrants. Zhao Yabin refused to let them into our home. She pushed them out and closed the door as she left. Chen Changdong rushed up and pushed her to the ground and took her house key. He then notified twenty or so policemen from the local station and the Lunan National Protection Military Unit. The men arrested Zhao Yabin without regard to legal procedures, then used the stolen house key to illegally enter and loot our home. With no one home, they confiscated personal computers, hidden valuables, cash, etc.

I didn't find out until the following day. I found my front door open and everything inside was a mess. On July 10, I went to the station and asked Chen Changdong what happened, to which he replied: "Zhao Yabin is suspected of practicing Falun Gong and has been detained. Your home was searched according to the law." I said to him: "You people took Zhao Yabin's house key and robbed our home. You don't even have a record of what items you've taken from my home. How is this in compliance with the law? It is simply criminal." 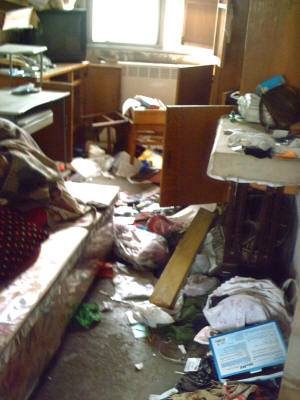 On July 11, I returned to Wenbei Police Station to find the case director Li Lei, and asked him directly for reasons of the arrest and looting, and demanded to see a record of all stolen articles. Li Lei replied: "You have no business here! We wouldn't give you such a record even if it existed. If you think there's anything you can do about it, then go ahead and try it!"

On October 8, I received a notification from the Lunan Court of Justice. Only then did I become aware that my wife was being judged in a court hearing. Her lawyer was already appointed by the court. On the morning of October 16 when the court session opened, the court only allowed three relatives to stay for the hearing. Judge Wang Jian would not permit me to speak and to defend my wife. The bailiff took away our defense statement that was right in front of us. The lawyer assigned by the court for her so-called defense placed a guilty plea. I noticed that figures on the public prosecution script and the actual confiscated item list did not match whatsoever. I straightforwardly asked the prosecution: "Why is this item list completely different than the one the lawyer gave us?" The court threw me out of the courthouse immediately, on the grounds of "Causing disturbance to the order of the court"! The only thing I could do was to expose the injustice, the crimes against the innocent, and the lies of the Tangshan People's Court outside of the courtyard, drawing up a crowd of court staff and many civilians who were at the scene.

Later, I found out that court personnel had taken Zhao Yabin away through a side door. As Zhao Yabin was led away, Sun Jian of the Lunan Court hit her with a vicious blow and pushed her down a high flight of stairs, causing serious injuries. I heard she was taken away on a stretcher to the detention center. During the following months, she never received any proper treatment for her injuries. Later on, I found out that she was sentenced secretly to a seven-year term, beginning in April 2009, in Shijiazhuang City women's prison.

For over a year, I've sought help everywhere for my innocent wife, hoping to obtain her freedom. After many twists and turns, the results so far have been negligible. I've become weary and tired both physically and psychologically, without any signs of hope. At my moment of despair, I overheard some news - the April 21, 2009 international investigation publication "Announcement by the Coordinator of the Investigation of Hebei Province Tangshan City Middle Court's Persecution of Falun Gong Practitioners," international investigation "ordering Tangshan City middle court to cease unlawful trials against Falun Gong practitioners and to immediately release all Falun Gong practitioners. The identified responsible persons will be held accountable for all damages as a result of persecution against Falun Dafa practitioners or their family members including prison mistreatment, torture, and even death." There were also New Tang Dynasty Television broadcasts. Now there is finally a gleam of hope!

“Some Thoughts on Using Divine Powers”

“Sydney: Raising Awareness about Falun Gong at the Festival of Fisher's Ghost (Photos)”