(Clearwisdom.net) On Saturday, September 12, 2009, the city of Schwetzingen held a church-opening evening with the theme "Churches in the same world" (1). The opening ceremony of the Truthfulness-Compassion-Forbearance International Art Exhibition was the main event of the evening's activity. 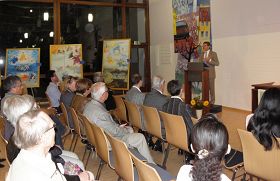 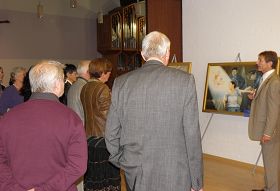 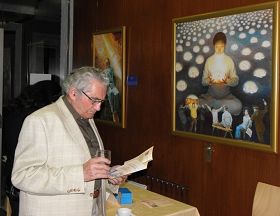 A visitor studied the paintings carefully and recalled his own detention experience during the Nazi rule. He said with tears, "These sufferings could only be borne by people with firm belief."

The Chairman of the Human Rights Arts Association Ars Honesta (the Association's name in Latin means "noble art") Mr. Volker Dietz said in his opening address of the art exhibition: "This exhibition clearly expresses the aspiration of those who have suffered terrible persecution. Millions of Falun Gong practitioners have suffered persecution simply because they don't want to act against their own conscience. The artists who participated in this art exhibition are among them."

In the opening ceremony, tenor Michael Hackmayer sang Schubert's classic An die Musik. Ms. Tang from China also performed a number on the Chinese harp. To commemorate these Falun Gong practitioners who have suffered persecution in China, she also sang in Chinese the following song:

We Miss You - A Tribute to Fellow Practitioners in China
Hundred layers of mountains,
Ten thousand layers of mountains,
From far away, we know the difficult situation faced by fellow practitioners,
In the danger your strong will has never wavered.
Chilly north wind,
Cold iron prison,
Accompanied by righteous thoughts, you overcome hundreds of difficulties,
The divine stories shall spread around the human world.

The Truthfulness-Compassion-Forbearance International Art Exhibition began with a group of oil paintings with the theme "The Beauty of Cultivation."

The second theme of the exhibition was "Uncompromising Courage." This theme reflects the unshakeable faith shown by Falun Gong practitioners under the brutal persecution. Oil paintings such as "Homeless", "A Tragedy in China" and "Psychiatric Abuse" depict details of the persecution. The oil painting "Red Wall" portrays the collapse of the Chinese Communist regime and the great tide of withdrawals in China from the Chinese Communist Party and its affiliated organizations.

Through the oil painting "Psychiatric Abuse," it is shown that in order to manipulate the public opinion and stir up their hatred towards Falun Gong, the Chinese Communist regime uses the national media to spread propaganda and lies. Claiming that they are "mental patients," the CCP officials detain healthy practitioners in mental hospitals and torture them with nerve-damaging drugs. In the painting, a policeman injects a poisonous drug into a Falun Gong practitioner who refused to renounce his belief. This drug would cause normal people to have speech problems and paralysis of the limbs. It could even lead to death.

The final theme of the exhibition is "Justice Will Prevail." It expounds the principle that doing good or bad deeds will be rewarded accordingly. 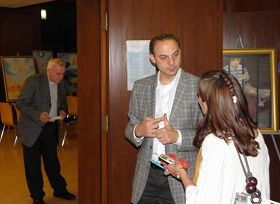 The exhibition organizer Father Thilo Muller talks to a reporter. In the background is Father Wolfgang Gaber viewing the paintings.

From people's expressions, it was very clear that they were moved by the art exhibition. Many people said they were deeply touched. Later Father Wolfgang Gaber also came to view the artwork. He was obviously moved and wrote in the visitor's book: "The art exhibition in Melanchthon Haus has awakened us all. How could we ignore such bloody abuse of human rights? ..."

Another visitor wrote in the visitor's book: "These paintings help us to be sober. I am deeply impressed. Their effects are far more profound than the modern media's explosive propaganda."

In the evening, visitors continued to come from other churches to view the art exhibition. They were all impressed and moved by it. Many people expressed gratitude for the chance to learn more about Falun Dafa and the persecution.

Note (1): Church-opening evenings are various community events held in churches, and are open to the public.