(Clearwisdom.net) At the end of September 2009 in Nagpur, the Divine Land Marching Band graced the stage of the annual Buddhist Festival of India. The invited Falun Dafa practitioners in the marching band performed, all the seats were occupied, and the audience was astounded. The event also attracted media attention. 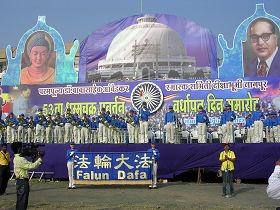 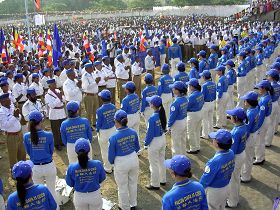 The Divine Land Marching Band at the Nagpur festival site 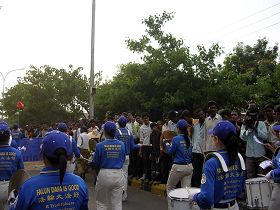 Nagpur, a city in the center of India with a population of 3 million people, is a busy transportation hub and also the Buddhist holy land of India. According to the event organizer, Patil,1.5 million people were expected to attend the ceremony, since, in the past, an average of 1 to 1.5 million have attended the event every year.

Last year the Divine Land Marching Band performed remarkably well. Having received a warm welcome from both organizers and spectators, this year they were invited once again. On the day of the event, over a hundred band members from Taiwan and Japan gathered to march along the streets despite the heat. Enthusiastic spectators welcomed them and completed the walk with them, touching the hearts of many.

Afterwards, the band formed into rows on the stage at the center of the festival and gave a dazzling performance. As they played, everyone had their eyes fixed upon the performers. Monks from the local area came to enjoy the show, too.

The director of the Divine Land Marching Band, Molly (尧纹), said, "I hope Falun Dafa has given the kindhearted Indian people a better future.

“A Human Body and a Three-Ton Vehicle ”