(Clearwisdom.net) On October 4, 2009, Falun Gong practitioners in New Jersey participated in the 15th Autumn Green Festival in Morristown, New Jersey. They set up a booth to introduce Falun Dafa, and in the bustling downtown, practitioners demonstrated the exercises to the peaceful music. Their peacefulness and elegant movements were very eye-catching, and thousands of local people stopped to watch, and to learn the facts about Falun Gong. Some learned to do the exercises on the spot.

One lady said, "I'm here shopping, and visiting friends, I'm on a tight schedule and very busy. But when I pass by here, listening to the Falun Gong music, I feel very relaxed." 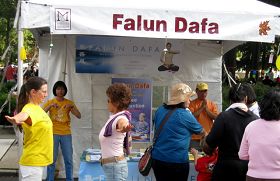 Regarding the ongoing persecution of Falun Gong in China, Richard Russa, who had been China to do business, said, "The government should not control everything, and should give people freedom of belief. Otherwise, the government will collapse just as the former Soviet Union did."

Seeing the peacefulness and elegance of Falun Gong, many people have a hard time understanding why the Chinese Communist Party (CCP) persecutes Falun Gong. Mr. Joseph Molvar said, "More people in the world should stand up to exert pressure on the CCP government."