(Clearwisdom.net) The twenty-seventh annual Spirit and Knowledge Expo was held in Helsinki, Finland in October 2009. More than two hundred groups participated in the Expo, its theme this year being "Freedom of Mind and Spirit." The content covered topics from the East to the West, including the aspects of life, mental health, alternative health care, natural medicine, yoga, literature and the arts, etc. Finland Falun Gong practitioners took part in the Expo by introducing Falun Dafa (also known as Falun Gong) and its principles of Truthfulness-Compassion-Forbearance. 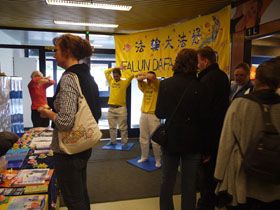 Falun Dafa practitioners demonstrate the exercises at the Expo 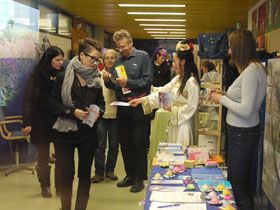 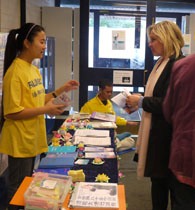 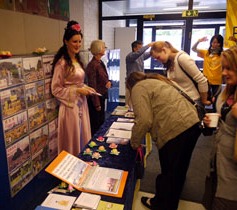 Many people at the expo said that they were interested in learning Falun Gong. A young man who was watching the exercise demonstration said, "I want to stay here longer. I feel really good." Two ladies watched the exercises for quite a long time. One said that she felt a good energy surrounding the area.

Merja Kiviluoma, a journalist from a Finnish magazine called Sielum Peili, was drawn to the practitioners' booth from a distance. After watching the demonstration for a long time, she interviewed a western practitioner about Falun Gong and the persecution. Ms. Kiviluoma heard that a practitioner named Jin and her husband, who experienced the persecution firsthand, were also there. She interviewed the couple as well. Jin talked about the experience of her whole family in China, where her mother was sentenced to eight years in prison, her sister was expelled from school and stranded in a strange place, and she herself escaped by going abroad to visit her husband. She knows another practitioner whose mother died as a result of persecution. His wife was still detained in prison and his young sister also died as a result of persecution.

Sympathy and astonishment could be read on Ms. Kiviluoma's face during the interview. She was also moved by the efforts of the Falun Gong practitioners to rescue their family members. She said, "Unbelievable. Living in so free and peaceful a country, I couldn't imagine such cruel treatment."

In the end, the journalist held Jin's hands and encouraged her, "Don't be afraid. I support you. All Finnish people will support you. The force of justice is everywhere. I will also help you make the appeal for your mother's release."