(Clearwisdom.net) An annual health expo was held on October 17 and 18, 2009 at the Vancouver Convention Center in Canada. Practitioners hosted a booth at the expo to help more people know about Falun Gong. Many people said that they had learned about Falun Gong and the brutal persecution by the Chinese Communist Party (CCP). Many people came to the booth and asked where they could learn the exercises. 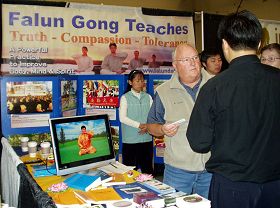 Some people asked as soon as they came to the booth, "Where are your practice sites? I want to learn Falun Gong." On the first day, over a dozen people registered their names, contact information or mailing addresses to be contacted about the local Falun Gong classes, which are always free of charge.

Those who have registered to learn the exercises were from various cities in the Vancouver area. Falun Gong practitioners have been invited to take part in parades held in those cities. They had distributed many fliers and provided people with opportunities to learn about Falun Gong.