(Clearwisdom.net) Recently, civilians attending a quitting the Chinese Communist Party (CCP) rally in Ansan, South Korea were assaulted by thugs, likely backed by the Chinese Communist regime. Ansan Congressman Mr. Bai (phonetic spelling) said that this was a serious incident which cannot be tolerated and it should be treated seriously.

The assault occurred on September 13, 2009, during a "Supporting 60 Million Withdrawals from the Chinese Communist Party" rally held in Ansan. Over 100 Chinese thugs infiltrated the rally, did damage without restraint, and assaulted rally participants. A number of witnesses testified that the thugs yelled: "Don't worry. We are supported by the Chinese Embassy. The Korean police are nothing." The police arrested some of the thugs on-site. 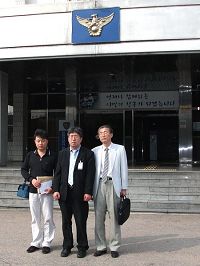 Congressman Bai said that he learned about the assault through Korean Freedom Network media, and was shocked to learn that foreigners (Chinese immigrants) openly assaulted Korean citizens.

He said that such incidents cannot be tolerated, "On the land of Korea, it is almost unimaginable for over a hundred foreigners to violently assault three Koreans in broad daylight. Even more upsetting is that many media outlets chose to remain silent on this incident. Consequently, many local residents didn't even know that such a thing happened... What exactly can we do to prevent foreigners or immigrants from using violence against Korean citizens? Our government policy is far from perfect in this regard. I want to express regret to the people who encountered such violence."

To call on more people to pay attention to this incident, the congressman printed "2009.9.13: Chinese Agents Assaulted Koreans in Ansan" cards for distribution. On September 29, 2009, he visited the Tan Park Police Department, where he expressed his concern and wishes that the police department would properly address the incident.

Congressman Bai said that laws need to be strictly enforced and media outlets should intensively report on incidents of this type in order to prevent similar incidents from happening. Meanwhile, the government should accommodate UN refugees such as Chinese Falun Gong practitioners who fled from China and provide them basic humanitarian protection.

Mr. Lee, manager of the Election Strategy Committee of Congressman Bai, stressed that the Korean government must clearly express its position on such a severe incident to the Chinese Communist regime as it is related to sovereignty.

It was reported that victims of this assault have filed a lawsuit against three Chinese thugs involved in the incident.