(Clearwisdom.net) The "Truthfulness-Compassion-Forbearance" Art Exhibition was held at a community center in Tokyo, Japan on October 8-11, 2009. Many people came to the exhibition. 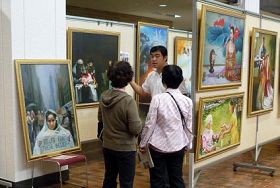 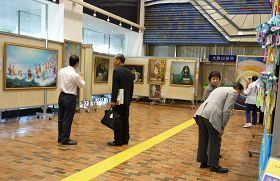 Practitioners explained the stories behind each artwork to the visitors. One lady stood in front of the painting "Why?" for a long time and cried. The painting tells the story of a boy who is jailed with his mother because they practice Falun Gong. His mother was badly tortured. The boy is sad but has no anger. His eyes are asking "Why," why his mother, a good person, has been tortured. That lady was deeply touched by the piece, and said she would tell her friends about the persecution. 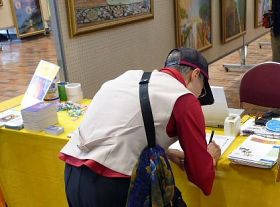 An older gentleman was attracted to a painting in which a Falun Gong practitioner is meditating. He told practitioners that he has been practicing qigong for 32 years, and it benefits him a lot. When he passed by the community center, he felt a strong energy field, so he came in and saw the artworks. The practitioners told him that in China, a lot of traditional culture, including qigong, has been destroyed by the Chinese Communist Party. The man said the paintings have strong positive energy, making him interested in Falun Gong. He asked for detailed information about Falun Gong and said that he would learn it.