(Clearwisdom.net) The disruption of New Tang Dynasty Television Asia Pacific (NTDTV AP)'s broadcast signal by an unknown source has seriously affected telecommunications and national security in Taiwan. Legislators Lo Shu-lei, Chu Fong-chi, Tsao Erh-chang, and Yang Li-Huan of the Transportation Committee of the Legislative Yuan introduced a proposal on October 8, 2009, requiring the National Communications Commission (NCC), the Transportation Department, and Chunghwa Telecom (CHT) to investigate the cause and the source of the signal's disruption and to prevent future incidents. The Transportation Committee passed the resolution. 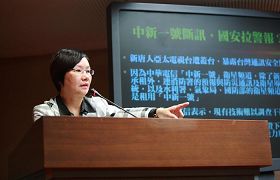 Legislator Lo Shu-lei introduced a proposal requiring the National Communications Commission, the Transportation Department and Chunghwa Telecom to investigate the cause and source of the signal's disruption and prevent future incidents.

NTDTV AP's signal is broadcast through the CHT's International Program Transmission Service, which is partially owned by the Taiwanese government. Intermittent signal disruption started at 1:30 p.m. on September 17. Daily interference has occurred during primary news broadcasts and lasted all day on October 1, the day the Chinese communist regime celebrated its 60th year in power. The low-frequency transmission of the satellite covers Taiwan and nearly four-fifths of mainland China.

CHT could not provide any alternatives during the signal disruption, which triggered protests from TV viewers. Several legislators of the Transportation Department expressed their dissatisfaction with the results of a preliminary investigation, which did not identify the source of the disruption.

Legislator Lo Shu-lei said the satellite was used for disaster relief and national security. If NCC and CHT technology could not find the source of the disruption, she wanted to know what should be done if it happened again or if it was needed for disaster relief. The other side of the strait has 34 satellites and is ranked number 3 in the world. She wanted to know how to prevent future interference through international institutions.

Legislators Chiang Lien-Fu and Kuo Wen-Chen asked why the agencies involved didn't have the capability to find the source of the interference. NCC Director Peng Yun said NCC's Resource Administration is investigating it. Similar interference happened during the Olympic Games in Beijing last year. This time it happened on the 60th anniversary of the CCP. The NCC's Resource Administration is taking it very seriously.

Kuo said the Chinese Communist Party was the source of the interference, so national security was involved. National security technology is needed to do an investigation.

Legislator Wu Yu-Sheng said if the CCP interfered with Taiwan's satellite, no matter which TV channel's signal was disrupted, it should be prevented from happening. "There is freedom of media in Taiwan. I would be upset if the CCP blocked our signals." He asked the NCC to pay special attention to the matter, investigate the source, report on it as soon as possible, and have talks with the Mainland Committee. "If not handled correctly, it could turn to a political issue," he said.

The Transportation Committee passed a resolution requiring the NCC, the Transportation Department, and Chunghwa Telecom to investigate the cause and the source of the signal's disruption and prevent future incidents.