(Clearwisdom.net) Falun Gong practitioners Li Xiufen and Gao Guizhen were arrested in August 2009 and then detained at the Weifang Detention Center. They were brutally tortured with torture methods called the "cross" and the "death bed" at the detention center. These torture methods are described as a living hell. Normally, if a non-practitioner were subjected to such torture for even one day, that person would become paralyzed. Nonetheless, Ms. Li Xiufen and Ms. Gao Guizhen were tied to these torture tools for 36 hours. The following is Ms. Li's own words about her horrifying experience.

My name is Li Xiufen. On August 1, 2009, I was arrested in my home in Weifang City. Two other practitioners were arrested at the same time as I, one of them bein Ms. Gao Guizhen. The other male practitioner was transferred to another place that night. Ms. Gao and I were detained at the Weifang Detention Center for a month, and were subjected to inhuman tortures.

We had violated no laws, but were nonetheless arrested. While at the detention center, we didn't cooperate with the guards and called out, "Falun Dafa is good." We were thus subjected to the torture tools called "death bed" and "cross." We were also force-fed and injected with unknown medicines, which caused us to be in a dazed state for a long time.

During our detention, Peng, who is head of the center, and Chen, head of the No. 1 Ward, with the help of four criminal inmates, subjected Gao Guizhen and myself to the above-mentioned torture methods separately. When I was tied to the "cross," Ms. Gao was tied to the death bed that day. The next day, we were switched. 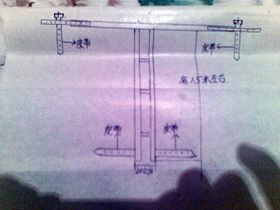 Illustration of the torture tool, the "cross"

The "cross" was made of metal pipes. The top horizontal part was formed with a thicker metal pipe about 1.6 meters long (5.25 ft.) and 5 cm (2 in.) in diameter. Two thinner pipes are inserted into the thicker pipes at both ends and their length can be adjusted accordingly in order to stretch the practitioner's arms to the extreme. Two leather belts affixed to the ends of the thin pipes are used to tie the practitioner's artifices. Two vertical pipes, which were 1.5 meters long (5 ft.) and 5 cm in diameter, were about 10 cm (4 in.) apart and welded to the horizontal pipe. Three short pipes about 10 cm long were welded to the two long pipes, which is like a ladder. The two leather belts affixed at the bottom of the two vertical pipes are used to tie the practitioner's feet. A practitioner is tied onto the cross with the arms outstretched and the legs separated.

When we were tied onto the cross without our feet touching the ground, the weight of the whole body was on the two vertical pipes, which felt like they were penetrating into our flesh. The pain in the internal organs was unimaginable. In order to to prevent external wounds from beeing seen, guards put a thin cover over the two vertical pipes. We were left tied like this from about 8:00 a.m. until about 10:00 p.m. The longest time we were tied there was 36 hours and we were not allowed to use the restroom during that time. Such a torture can cause severe internal injuries and even death, without any visible external wounds. The criminal prisoners (non-practitioners) could be paralyzed if they were subjected to this torture for just one day, as it is beyond what most people can endure.

When we were tied to the death bed, our hands and feet were cuffed, and the handcuffs were attached to metal hoops that were 6 cm (2.4 in.) in diameter, and we were not able to move even a little. If we moved a little bit up, the cuffs on the ankles would cut into the flesh and cause extreme pain. If we moved a little bit down, the same thing would happen on our wrists. My wrists were badly injured from the handcuffs cutting into my flesh. Gao Guizhen had two big bubbles on her wrists from the torture which took more than ten days to heal.

When we were tied to the cross or the death bed, a female doctor named Kang conducted brutal force-feeding and injected us with unknown drugs. Even when the needle was bent during the injection, she would not remove it. She said to the inmates who were helping her, "Don't remove it. It has the same effect when it is injected into muscles." In order to get their detention terms reduced, the inmates also tried to give us a hard time, by doing things such as smearing the liquid or vomit from the forced-feedings on our faces, which caused many flies to crawl on our faces.

The experience of being tied on the cross and death bed made our lives like a living hell. It has been learned that almost all steadfast practitioners were subjected to such tortures at this detention center.

The other people involved in the forced-feedings were guard Han, doctor Zhu and four inmates.

On August 31, Ms. Gao's and my life were in danger due to these torture methods. To avoid the responsibility and to cover-up the crimes, Ms. Gao was sent to the Wangliu Middle School and is still detained there as of today. I was sent to a new brainwashing center in Changyi and left that place five days later.