Montreal, Canada: Medical Doctor, "We Enjoyed It from Beginning to End!" (Photo)

The Divine Performing Arts (DPA) New York Company performed before a fully packed audience at the famous Place des Arts theater on the evening of January 17, 2009. High praise was showered on the show by people from all walks of life.

"We Enjoyed It from Beginning to End!"

Harold Miller, a retired eye doctor and a musician, attended the show with two of his friends. "I like the show very much. Very enjoyable! We learned a lot about Chinese history, Chinese traditions, Chinese culture, and Chinese entertainment, music, and dance. 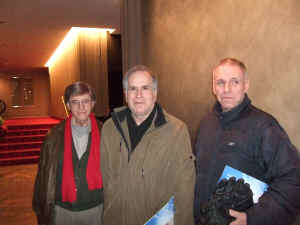 Harold Miller, a retired eye doctor and a musician, attended the show with two of his friends.

Dr. Miller told the reporter that he is an accomplished violinist and thoroughly enjoyed the show's music, even though it did not feature a predominance of Western instruments. "Yes, the music was very nice--very different but very nice. Very, very enjoyable! It was lyrical and the orchestra played very well, yes.

"I didn't experience the show as being 'foreign,' where you have some instruments that are very percussive. The instruments were very different than Western instruments, but it was very enjoyable. We enjoyed it from beginning to end!"

The show opened his eyes to different music and art forms of a different culture. "We learned a lot about the Chinese different ethnic groups, the religious groups, and so on. We learned that China has a very diverse population. It's not uniform or monolithic, but it is diverse, a diverse population consisting of different traditions, different areas of southwest China, and Tibetan dances. So we enjoyed that."

He mentioned that he attended last year's DPA show and expects to take in next year's when it comes back to Montreal. "We always come to this. Last time we were here and now we are here again."