(Clearwisdom.net) It has been over 9 months since the death of Shanghai practitioner Ms. Gu Jianmin. As someone who knows the details, my conscience urges me to expose the deeds committed by the guards of the Pudong Detention Center and the Pudong 610 Office, who directly caused Ms. Gu's death. 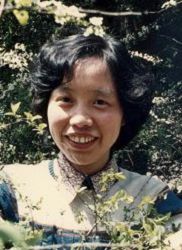 In early March 2008, Falun Dafa practitioner Ms. Gu Jianmin, over fifty years of age, was arrested and imprisoned at the Pudong Detention Center for distributing truth clarification materials. Her physical health was great at the time of her imprisonment. In mid-March, Ms. Gu went on a hunger strike to protest her persecution. She was then taken by the guards to be force-fed. She was dragged back to the prison afterwards and dropped heavily on the floor at the prison door. The guards locked the door and warned the other prisoners: "None of you are allowed to look after her. Let her be."

Inside the prison, the prisoners usually do not dare to defy the guards' orders for fear of their retaliation. After seeing Ms. Gu not moving for quite a long time, some prisoners became sympathetic and someone helped her sit up against the wall. Her face was abnormally pale; she touched her chest and said it was in a lot of pain. Her facial color got worse and became eerily pale. The prisoners were afraid that she might die; therefore, they pressed the button for the guards. The guards had her carried out when they saw the serious state she was in.

At the critical point, when Ms. Gu was between life and death due to massive internal bleeding caused by the force-feeding, the guards and 610 Office personnel only cared about how to clear themselves of any responsibility. They delayed rescuing Ms. Gu and lied to her husband about her condition. They manipulated him with embellished lies so that he would arrange outside hospital treatment. They deliberately slowed down the rescue process. The police were afraid that their deeds would be exposed if Ms. Gu could still talk to her husband about what had happened. They deliberately slowed everything down so that she was already senseless and dying upon meeting her husband.

However, the fact that blood was dripping out of her mouth continuously before her death exposed the crime they had committed.

Ms. Gu Jianmin's family was determined to seek justice for her painful death. They wanted to punish the evildoers and protect Ms. Gu's rights with the current law. However, the lawyers who agreed to take the case were threatened with the closure of their law practice by the 610 Office and Shanghai Law Enforcement Department. The CCP made a rule that any lawyer wishing to take on a Falun Gong case must first obtain the approval of the local law enforcement office. The case couldn't be dealt with if it wasn't approved by the law enforcement office.

To quickly hide all the evidence for the cause of her death, the 610 Office threatened her family not to expose what had happened. Also, they gave money to the family to keep their mouths shut, and forced them to cremate the body in a hurry. On the other hand, they targeted Ms. Gu's sister, practitioner Ms. Gu Jihong. She was placed under surveillance around the clock. She was being watched, followed, and harassed over the phone and in person.

Right before the Olympics, on July 26, 2008, the Putuo District 610 Office staff forcefully arrested Ms. Gu Jihong, who was sitting at home at the time. They forced the Putuo District Court to give her a three-year imprisonment term on November 19, 2008. Ms. Gu Jihong has been persecuted non-stop in recent years: she was given a three-year term in June 2000, sentenced to forced labor for one year in June 2005, and has now been arrested and sentenced again.