On September 29, at the Zesiger Sports and Fitness Center, MIT held a student organization expo to welcome new students. The MIT Falun Dafa Student Club reserved a booth to introduce Falun Dafa and clarify the facts of the ongoing persecution in China to students and parents. 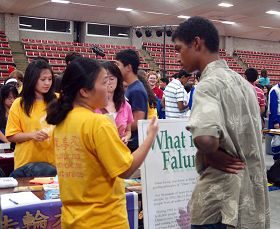 A practitioner introduces Falun Dafa to a student 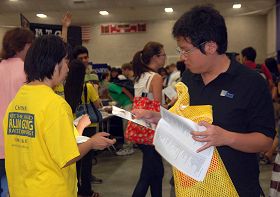 A Chinese student was surprised by the facts of the persecution 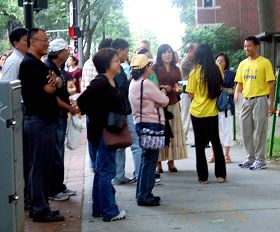 Practitioners clarified the truth of Falun Gong to Chinese tourists

The club displayed two large posters to explain what Falun Gong is and how the Chinese Communist regime persecutes the practice. In addition, five practitioners demonstrated the five sets of exercises. Meanwhile, several practitioners shared their personal cultivation experiences and the suffering of their relatives in China with booth visitors. During the 2-hour event, 14 students showed interest in participating in club activities and left their email addresses and phone numbers.

During the expo, two buses of tourists came to MIT for site seeing. In the first bus, most passengers were Chinese immigrants from Maryland and they came to the Falun Gong booth and demonstration. Several members of the group told the practitioners: "Falun Gong is a good practice!"

Passengers in the second bus were westerners from Los Angeles. An elderly member of the group chose to stay at the booth to learn the Falun Gong exercises. When he was learning the exercises, there were another 5 tourists from the group watching him. In just a little while, they also decided to learn. The number of tourists learning the exercises soon became 10, 15, and more. Eventually, it became a large group. Before they left the practitioners, they asked for Los Angeles practice site information and took a lot of informational materials.