There are two mysterious facilities in the Daxing District, which is located in the southern part of Beijing. There is a lot of farmland in the Daxing District, with many elaborate gardens. There are castles near some of these gardens. Many visitors went to Beijing during the Olympic Games. If any foreign journalist or tourist is interested in these places, please go take a look.

Those grand gates look like the Arc de Triomphe in Paris or that of a luxurious hotel. Red tiles and walls can be seen behind some of the high walls. There is electrified wire on the tops of these high walls. They are two facilities that serve as prisons and forced labor camps. 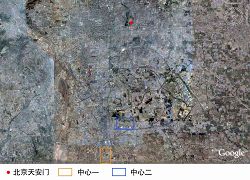 What other country has such extensive facilities for detaining people in its capital city? Moreover, we have not counted the detention centers and prisons that are scattered throughout other districts and counties in Beijing. What do you think? Is it worth visiting? Let's take a general view via Google Earth.

Prisoners from outside of Beijing but sentenced in Beijing and many Falun Gong practitioners that were "illegally sentenced" are imprisoned here. They will be dispatched to prisons throughout the country. The office area is in the south, while the agricultural field where the prisoners labor is to the north.

Prisoners work inside the buildings. The small yard in the lower left hand corner is a place that people will want to avoid by all means.

In the past, the women's prison in Beijing was confined only to a small block located in the south, where there are gray castles as well as the office area in the west. However, with the CCP's persecution of Falun Gong, this women's prison was expanded. Falun Gong practitioner Ms. Dong Cui was beaten to death there. Ms. Xu Na, wife of Mr. Yu Zhou, a musician and practitioner who died just months before the Olympic Games, was also severely tortured there. 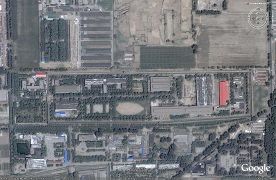 The Beijing Prison was known as the "South Building" because its prison area is a soldier's camp called "South Building" before the CCP came into power. At that time, there was only one three-story building in the entire Daxing area. This unique building was turned into a prison.

Don't be deceived by the spacious garden outside the office area and the beautiful gate. Located here is the notorious Beijing Forced Labor Dispatch Center. Almost all of the forced laborers in Beijing, most of whom are Falun Gong practitioners that have been illegally arrested, are sent here from detention centers in different districts of Beijing. In time they will be sent to the Beijing Forced Labor Camp or labor camps in other provinces.

This place is sometimes called "hell on earth" not only because of the hard labor and the strict rules, but more importantly, because of the isolation and cruel tortures that take place all the time. The path beside the middle of the square is where many people were forced to squat down with their hands on their heads for the first time. Many were shocked with electric batons and dragged over the ground just because they refused to squat.

Tuanhe Forced Labor Camp, which is located due west of the Dispatch Center, is where male Falun Gong practitioners are detained. The big garden to the south of the road is the office area, while the prison area is north of the road. They set aside the grassy area in the front yard of the prison to be like a zoo. However, they are no less cruel just because there are birds in the yard. Mr. Peng Junguang, a practitioner from Huairou, Beijing, was beaten to death here.

There are fewer women criminals than men. That's why the formerly named Tiantanghe Forced Labor Camp, the women's labor camp, was so small. The "L" shaped house with a small yard in the northeast corner of the camp is the training center. During the first two years of the persecution, the police used electrical wire to bind female practitioners together and then shocked them with a generator. The practitioners soon developed blisters all over their bodies.

After the CCP started persecuting Falun Gong, many practitioners who refused to give up the practice were sentenced to a forced labor camp. At least half were female. Tiantanghe Forced Labor Camp was soon full. The women's forced labor camp has changed its address several times.

After the women's labor camp moved in 2001, the old facility was used as a legal training center. In earlier days it was used as a brainwashing center. Groups of practitioners were brainwashed and tortured there. Later, it was turned into a secret concentration center. Falun Gong practitioners, Buddhist monks, and Christians were detained there secretly. As far as outsiders were concerned, the detained people were missing. Nobody knows how many people have been tortured to death here. In 2003, this concentration center was expanded to the north.

Xin'an Forced Labor Camp used to hold male drug abusers. After Tiantanghe Labor Camp was full, the male forced laborers were sent to Northeast China. Then it became another place to torture female Falun Gong practitioners. The women's prison is located in the south, across the road. However, after 2003, Xin'an Labor Camp was too small to hold all the Falun Gong practitioners who were sentenced to forced labor there. The women's labor camp was therefore expanded. It moved again to a newly-built labor camp. What you see here is also an expanded building after the women's labor camp was moved.

The small yard with a door in the southwest corner remains unchanged. That is the training center, where the police tortured female Falun Gong practitioners by means of small metal cages, electric batons, motorcycles, and other devices.

This group of buildings is the notorious Beijing Women's Forced Labor Camp. Ms. Wu Junying, a practitioner, was beaten to death when she was detained in this labor camp for the second time.

About 85 percent of the detainees in the Beijing Women's Forced Labor Camp are Falun Gong practitioners. There are three prison buildings, and each has three floors. One group of forced laborers, about 120 people, is detained on each floor.

The ¼ arc building hidden behind of the buildings in the east is the training center. It was here that Falun Gong practitioner Ms. Zhang Lianying was beaten into a coma and had her skull cracked. 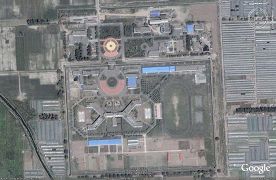 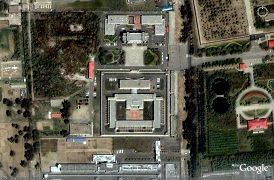 The Chongwen Detention Center is one of the many detention centers in Beijing. Ms. Xu Na, wife of Mr. Yu Zhou, is now detained here. 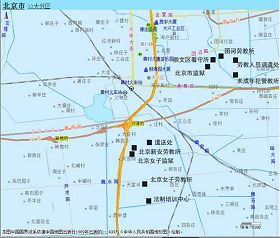